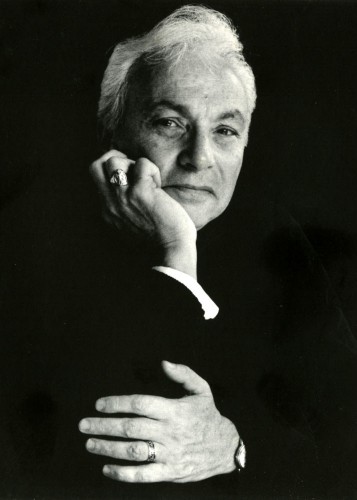 The Florida International University School of Music will celebrate the 80th birthday of founding director, musician, composer and educator Fredrick Kaufman with performances by guest artists and FIU faculty in honor of his music achievements on Tuesday, April 26, 2016 at the Herbert and Nicole Wertheim Performing Arts Center.

Nine performances of his most powerfully written compositions, including Kaminarimon, selections from Stars and Distances and The Urban Quartet, will be accompanied by interesting narratives of their creation, along with visual effects that will transport the audience through eight decades of his work.

According to concert producer Karen Fuller, “I wanted to re-create the wonderful nostalgia and experience of attending a music concert of 20 years ago while he was the Director of the FIU School of Music while taking the audience through his music journey and life experiences which are an integral part of his music and compositions.” 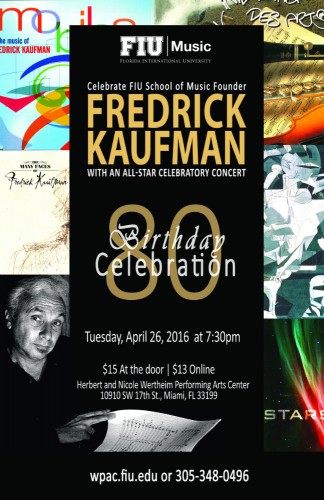 Fredrick Kaufman is the composer of over one hundred and thirty published compositions that have been performed worldwide. Kaufman is a former Fulbright scholar, and recipient honors and fellowships from the Endowment of the Arts, the Rockefeller, Guggenheim and Ford Foundations.

During his 15 years at FIU, held the position of Composer-in-Residence for the University and was the founding Director of the FIU School of Music for ten years and established its internationally acclaimed FIU Music Festival. Currently, Kaufman holds the distinguished position of Professor Emeritus in Composition at Florida International University and actively tours the world with his music.

His works have received prizes at international competitions and have been performed throughout the world at major music festivals. Israeli television has paid tribute to him as a composer in the thirty minute documentary film, Fredrick Kaufman- Life of an Artist.

His Kaminarimon (for Taiko drums and Flamenco dance) has been called “remarkable” and “stunning” and was voted as the number one classical composition of 2002 and “the most imaginative new work of the year” by music critic James Roos of The Miami Herald. String Quartet #6, The Urban, was called “stunning” by The New Yorker magazine and was nominated by Lukas Foss in 2007 for a Pulitzer Prize.

Fredrick Kaufman recently completed the Guernica Piano Concerto for concert with pianist Kemal Gekic and the Czech National Symphony Orchestra. The premiere performance took place at the Sibelius Concert Hall (Feb, ’13) in Prague and was a spectacular success. It received 4 curtain calls and a review that called the work “a masterpiece…extraordinary… a convincing, emotional, passionate, vivid piece of music” by Music Review (Prague).

His latest recording on the Navona label in November 2015, Stars and Distances, performed by the Florida Grand Opera and conducted by Andrew Bisantz, will be played on a 24 hour loop at the Patricia & Phillip Frost Science Museum Planetarium set to open in Miami in fall 2016. The two feature works are world premieres of his atmospheric choral & instrumental pieces that depict the cosmos in Stars & Distances and Seven Sisters.

Guests are invited to a champagne reception taking place directly after the concert celebration.