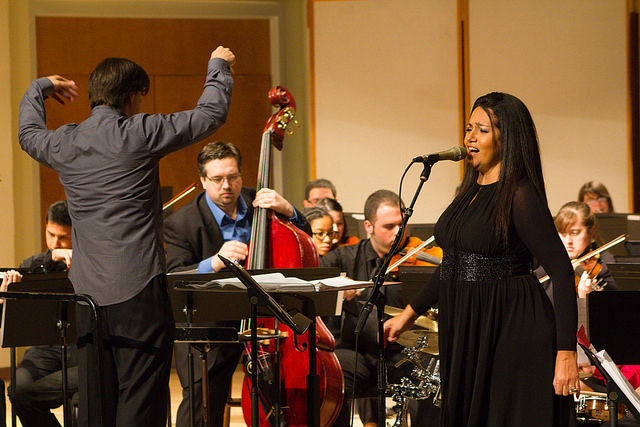 FIU faculty and other U.S. based artists will share the stage with Cuba’s National Symphonic Orchestra in Havana, Cuba as the opening concert for the 2016 Cuba Disco Festival on May 15th.

“I look forward to bringing our music to Cuba. The land where my father was born,“ stated Associate Professor of Jazz Michael Orta, who has been directing the FIU Latin Jazz Ensemble for many years.

This historic move was initiated by TOCA Culture, a not-for-profit cultural organization that promotes the visual and performing arts through cultural exchange and performative encounters throughout the Americas, with particular focus on Brazil-USA-Cuba interface.

Bossa Nova Sinfónico is a project founded with the purpose of sustaining Antonio Carlos Jobim’s body of work and legacy among music lovers everywhere. Jobim was the most pivotal figure in Brazilian popular music over the last century. His music has permeated cultures around the world.

Its 2013 premiere in Costa Rica was quickly followed by a whirlwind tour throughout Central America, Mexico, and the United States. Two seasons ago, South Florida audiences were treated to a performance at FIU’s Herbert and Nicole Wertheim Performing Arts Center featuring these local favorites alongside the FIU Symphony Orchestra. In 2014, Bossa Nova Sinfónico received a Latin Grammy nomination and also won the “Best CD of the Year” at the Brazilian Press Awards in the United States.

Cultural interactions between the U.S. and Cuba have inevitably increased due to recent announcements by both countries to normalize relations, with Music faculty already establishing dialogue with its cultural centers. In early April, Director of Guitar Studies Mesut Ozgen made a visit to Havana to give a series of masterclasses at the National Institute of the Arts (ISA) and composer Orlando Jacinto Garcia, whose music will be premiered at the upcoming Festival de la Habana, will also give masterclasses during his upcoming fall visit.