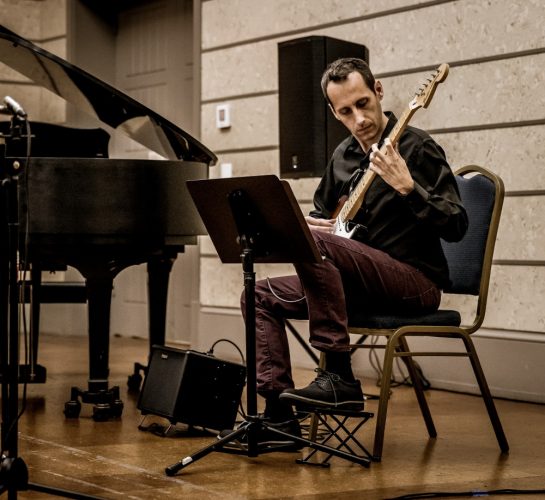 FIU Music Faculty member, Federico Bonacossa, is always pushing the boundaries in music; innovative is the perfect word to describe him and his success.

Bonacossa spent his early years playing electric guitar and skateboarding before suddenly falling in love with classical music after listening to some old tapes of Bach’s Brandenburg concertos and Mussorgsky’s Pictures at an Exhibition. Born in Italy in a small town called Olbia, located on the island of Sardinia, he would eventually study classical guitar at the Conservatorio Statale G. P. da Palestrina in Italy before moving to the U.S. in 2001. Now, he holds a master’s degree from the Peabody Conservatory and a doctorate from the University of Miami in classical guitar performance and music theory.  He also holds a master’s degree in music composition from Florida International University where he studied composition and electronic music.

His recent work as a composer explores various forms of interaction between live performers and the computer, the relationship between pitch and rhythm, and the transcription of spontaneous vocal gestures with the aid of the computer. In addition, he has a strong interest in computer-assisted and algorithmic composition.

Federico brings his entire repertoire with him into the classroom. Currently, he serves as an instructor here at the FIU School of Music where he teaches music theory and musicology courses, as well as the MIDI Technology class. He has also collaborated with FIU’s School of Architecture Robotics Lab on some algorithmic pieces for robotic percussion. At FIU, Federico studied composition with Orlando Garcia and electronic music with Jacob Sudol where he says he quickly became passionate about music incorporating live-electronics.

Federico is currently wrapping up three recording projects of his compositions, one of works for guitar and electronics that use unconventional tunings, one works for various solo instruments and live electronics, and one of works he has written for dance companies. All three recorded albums will be released this coming Fall.

On top of that, he just finished composing a set of 14 etudes for solo guitar for guitarist Tom Clippinger which are scheduled to be premiered in April. He is concurrently working on some more abstract performance pieces for an upcoming performance for Wake up Miami! on October 7. This is a very interesting series organized by PAXy that takes place on Monday mornings at 8:30am at the Government Center Metrorail/Metromover station. Wake up Miami! is PAXy’s community project that brings FREE live music and art into people’s everyday lives by presenting a series of concerts/performances at Miami Metrorail/Metromover stations during the morning commute.

In late October, he will be heading to Europe to perform at the Irish Sound Science and Technology Conference in Cork.

This summer, Federico was also awarded the FUNDarte Artist Access Award. FUNDarte is a Miami-based cultural incubator that links our community to the world. They present an array of concerts, plays, dance performances, and films and visual arts that enliven local culture with flavors of Latin America, Spain, the Caribbean, and the world beyond. In late September he will be using the funds from the FUNDarte award to travel to Santa Cruz to attend a workshop with Larry Polansky, a composer whose work he finds inspiring.

Speaking on his motivations and ambitions, he concluded, “I don’t consider myself particularly ambitious in the sense that I don’t need awards to stay motivated. I just love what I do and that’s why I keep doing it. But of course, it’s nice to feel that your work is appreciated.” He continued onto his personal motivation saying, “My passion for music is really more of an obsession. My idea of a perfect vacation is one where I can spend most of the day composing and practicing guitar. My wife and kids are very patient and encouraging, which really helps. My colleagues at the School of Music have always been very supportive about what I do in and outside the classroom and I feel extremely lucky to work here. We have some really superb musicians and scholars on our faculty!”