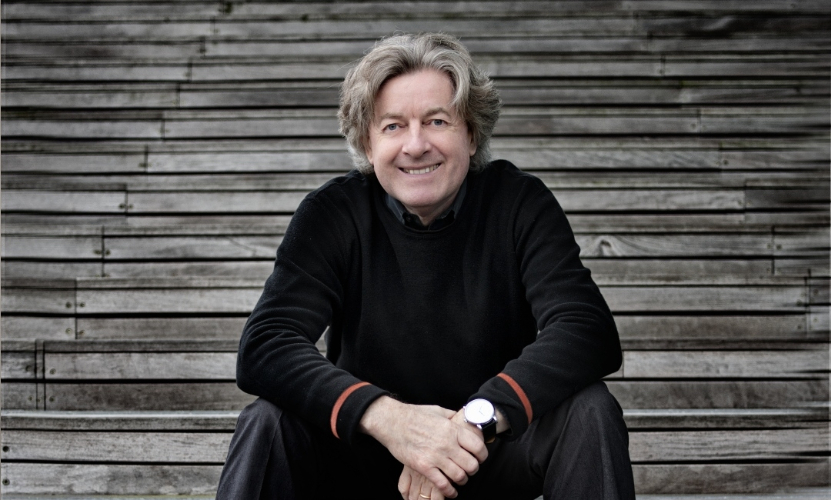 The FIU School of Music is pleased to announce the appointment of British born conductor James Judd as Guest Artist-in-Residence for the 2013-2014 season. As part of his residency, he will lead a series of conducting master classes that are free and open to the public. He will also conduct the FIU Symphony Orchestra as part of the Orchestral Masterworks Series in a spring performance set to take place on Friday, April 11, 2014 at 7:30pm in the Herbert and Nicole Wertheim Performing Arts Center Concert Hall.

Known to the world for his bold style, he has conducted the Berlin Philharmonic, Rotterdam Philharmonic, Orchestre National de France, Gewandhaus Orchestra of Leipzig, Royal Philharmonic, London Symphony, the English Chamber Orchestra, BBC Symphony, the NHK Symhony, and more recently, the Hungarian National Philharmonic Orchestra, the Metropolitan Orchestra of Tokyo, among many others.  Previous appointments  include Principal Guest Conductor of the Orchestre National de Lille (France), Principal Guest Conductor of the Adelaide Symphony (Australia), Music Director of the New Zealand Symphony Orchestra, and 14 years as Music Director of the Florida Philharmonic Orchestra. An extensive collection of his orchestral recordings can be found on the Naxos, Decca, EMI, and Philips labels.

Convinced of the transformational power of music in the lives of youth, he has led the orchestras of the Juilliard School, Curtis Institute of Music, Manhattan School of Music, Guildhall School, Trinity College of London and Aspen Music Festival as well as the National Youth Orchestras of Australia and New Zealand. In 2008, he founded the Miami Music Project (MMP) in an effort to empower Miami-Dade children by providing free music education based on the “El Sistema” framework. The establishment of a multi-level partnership between the Miami Music Project and the FIU School of Music to provide educational opportunities to the underserved communities of Miami-Dade in 2012, fueled a relationship that later resulted in the residency of James Judd this season.

FIU School of Music conducting students are teeming with excitement as his first conducting master class of the semester quickly approaches. According to Darwin Aquino, the Conducting TA to Maestro Grzegorz Nowak of the Royal Philiharmonic Orchestra, “It is a privilege to work with Maestro Judd. He is a very sensitive artist with a deep knowledge about tasks as conductors. We are learning a lot from him, both the orchestra and the conductors.”

To view the School of Music calendar of events, click here.

About the Orchestral Conducting Program

FIU offers an advanced Orchestral Conducting Program for talented student at the graduate level. Candidates accepted into this program are coached weekly with accompaniment of two faculty pianists under the direction of Maestro Grzegorz Nowak, Principal Associate Conductor of the Royal Philharmonic Orchestra in London. Conducting students get plenty of podium time with FIU Symphony Orchestra, and participate in master classes by renowned masters such as Jose Serebrier, Giancarlo Guerrero, James Judd, Eduardo Marturet, Neal Varon, David Effron and Gustav Meier. Acceptance into this program is limited to a few most talented candidates and the audition process is highly competitive. Successful candidates must be outstanding musicians with talent and passion for orchestral conducting.