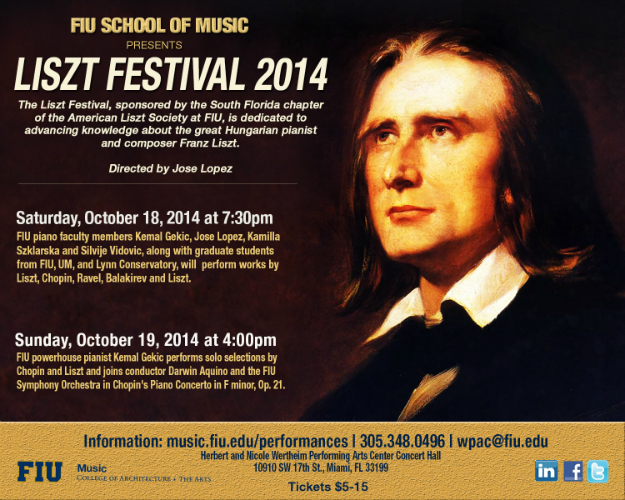 According to the American Liszt Society, “Franz Liszt was perhaps the most misunderstood musician in the history of our art. One has only to read a few pages of Alan Walker’s monumental biography of Franz Liszt before realizing that, in truth, Liszt was a deep thinker, and he had a profound effect on the musical minds of his day. His inspiration, genius, and generosity influenced the development of musical thought well into the twentieth century.”

It was this very reason that compelled FIU Keyboard Coordinator Jose Lopez to push for the approval of the South Florida Chapter of the American Liszt Society (ALS) at FIU in 2010, joining 16 other chapters in different parts of the United States. Since then, the chapter has presented annual concerts and events at FIU’s Herbert and Nicole Wertheim Concert Hall, the Deering Estate Estate (as part of the Piano Series), and the Coral Gables Museum, among other venues in an effort to promote Liszt’s contributions as performer, composer, and humanitarian. Currently, officers of the FIU Chapter include President Jose Lopez, Treasurer Kamilla Szklarska, Secretary Laura Wilcox, Artistic Advisor Kemal Gekic, and Honorary Advisor Frank Cooper.

“As a pianist, Liszt’s influence eclipsed all performers before, during, and after his time,” notes Lopez. “As a composer, he was at the forefront of new developments in European music that influenced contemporaries such as Wagner and future stylistic manifestations such as Impressionism, Nationalism, and Atonalism.”

The first performance is set to take place on Saturday, October 18th at 7:30pm in the Herbert and Nicole Wertheim Concert Hall. Performers will include FIU pianists Kemal Gekic, Jose Lopez, Kamilla Szklarska and Silvije Vidovic, along with graduate students from FIU, UM, and Lynn Conservatory. They will perform works by Liszt, Chopin, Ravel, Balakirev and Liszt transcriptions by Busoni and Horowitz.

The festival will conclude with a matinee performance on Sunday, October 19th at 4:00pm and will feature FIU and South Florida’s powerhouse pianist Kemal Gekic in a selection of solo repertoire by Chopin and Liszt. He will join conductor Darwin Aquino and the FIU Symphony in Chopin’s Piano Concerto in F minor, Op. 21 for the finale.

For more information on the October 19th performance, click here.