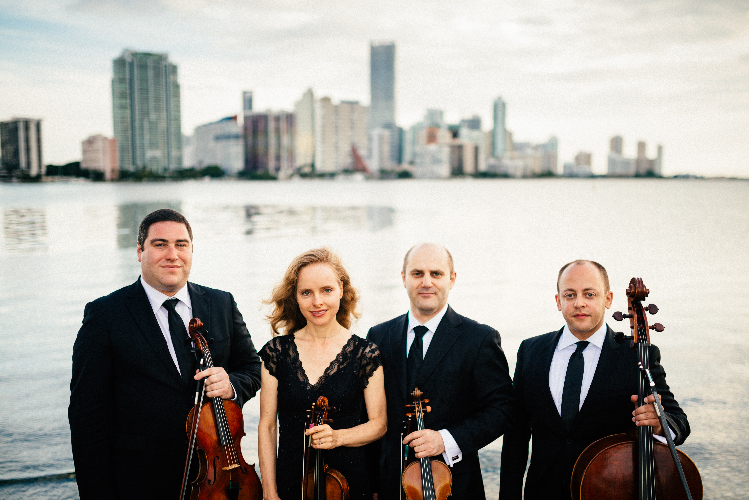 As part of an ambitious series of music and dance performances, the hall (Bailey Hall) hosted a concert of Jewish music Sunday afternoon marking the 76th anniversary of Kristallnacht (The Night of Broken Glass).

On the night of November 9, 1938, supposedly in response to the killing of a German diplomat in Paris by a Jewish youth, over a thousand synagogues were torched and homes and businesses of Jews were looted and destroyed. Nearly one hundred people were killed and thirty thousand were arrested by the Gestapo and taken to concentration camps. It was a prelude to the Holocaust, the annihilation of Europe’s Jewish population (as well as gypsies and homosexuals) on a scale difficult to perceive even today.

The Amernet String Quartet was featured in a program of rarely heard chamber and vocal works. For Michael Klotz, the group’s violist, the concert had a personal dimension: his grandparents were survivors of Auschwitz.

When composer Viktor Ullmann was murdered at Auschwitz, the world lost a genius. A pupil of Schoenberg, Ullmann composed his String Quartet No. 3 in 1943 at the Theresienstadt concentration camp. (Ullmann wrote over 20 works at Terezin, not all of which have survived.)

Lasting just over ten minutes, the compact score is in four continuous movements. Opening in the romantic vein of Schoenberg’s Verklärte Nacht, a Presto turns harsh with over lapping instrumental lines. The desolate Largo is the heart and soul of the score, deeply imbued with tones of impending tragedy.  A concluding Allegro vivace is at times playful but also dark and angular. The superbly crafted score brought out the Amernet’s plush tonal sonority and lithe blending of timbres.

The quartet also gave a forceful performance of Ernest Bloch’s Paysages. A multifaceted composer, this three movement suite comes not from Bloch’s Judaic, neo-classical or modernist periods but is a musicological exploration of the sounds of Alaska, the Swiss Alps and the Congo. From the high harmonics of “Alpestre” to the wild dance rhythms of “Tongataboo,” this is a highly imaginative work that poses instrumental challenges, easily handled by the Amernet foursome.

Cantor Daniel Gross was the featured vocal soloist in a series of Yiddish and Hebrew texts. Resident cantor at Adat Shalom Synagogue in Farmington Hills, Michigan, Gross has sung baritone roles with leading regional opera companies. His deep bass-baritone resounded in the opening Esa Enai (I Will Lift Up My Eyes) by Israel composer Mordechai Yardeini. Four Yiddish Songs in luminous arrangements by Leo Zeitlin prominently featured Klotz’s mellow viola. Devoid of vibrato and strong in the lowest depths, Gross was vociferous and moving in the traditional Eyli, eyli (My God, My God), light and witty in the child’s play of Pattycake, pattycake and strongly reverent in the Kaddish Prayer of Rabbi Levi-Isaac.

Grossd concluded with a stirring rendition in Hebrew of the traditional Im Eshkachech (If I Forgot You Jerusalem). As an interlude Amernet violinist Misha Vitenson and Mason sweetly conveyed the Viennese schmaltz and sadness of Fritz Kreisler Liebeslied (Love’s Sorrows).