Now in its 20th year, the three winners of the annual FIU Concerto Competition will perform with the FIU Symphony Orchestra on April 17, 2016 at 4pm in the Herbert and Nicole Wertheim Performing Arts Center Concert Hall. The FIU Symphony Orchestra, under the direction of guest conductor Maximiano Valdes, will accompany the soloists.

Every spring, FIU music majors in good standing compete against one for a coveted chance to perform alongside the FIU Symphony Orchestra in its final spring concert of the year. The competition is a rigorous process involving two adjudicated rounds with both internal and external judges.

The concert will open with a side-by-side concert with the FIU Symphony Orchestra and the Miami Music Project Leaders Orchestra performing Wagner’s Die Meistersinger von Nürnberg, to be followed by Cimarosa’s Concerto for Two Flutes played by second place winners, freshman Izak Kertznus and sophomore Anamaria Martinez. Afterwards, first place winner and graduate violinist, Mariana Yern Corzo, will perform Mozart’s Concerto for Violin No. 4 before the concert closes with Symphony No. 7 by Beethoven.

“In 2015, I graduated from FIU with a double bachelors in Violin Performance and Music Education, and I am now pursuing a Master in Music Education,” said Ms. Corzo. “I am blessed to have a violin teacher like Marcia Littley, who always has and continues to believe in me, and whose care, support and knowledge have made me the violinist I am today. Thank you to my husband Isaac Corzo, my family, the FIU School of Music, and most importantly to God for allowing me to have this experience.” 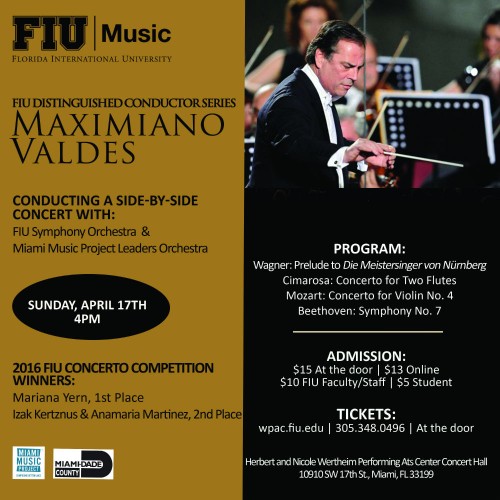