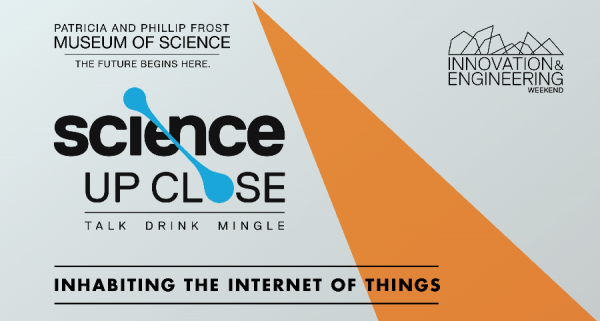 Roberto Rovira, Chair of FIU Landscape Architecture + Environmental and Urban Design, will be a moderator, panelist, and workshop participant in Innovation & Engineering Weekend: Building the City of the Future, a weekend of events hosted by The Patricia and Phillip Frost Museum of Science, which is expected to open in 2016.

Rovira will participate in the following two events, the latter of which is open to the public:

The Museum will invite regional media to an informative press conference and panel discussion announcing a five-year, $1 million Inventor-in-Residence program for the new museum’s Innovation Center. Funded by CappSci, founded by Dr. Ted Caplow & Pascale van Kipnis Caplow, the program will seek solutions to sustainability challenges. Information and details on the program and prize will be unveiled at the press conference, followed by a formal panel discussion featuring local and international luminaries in the field of innovation and sustainability. A welcome will be provided by Trish and Dan Bell.

The panel theme is “How Science Advances Through Competition.” 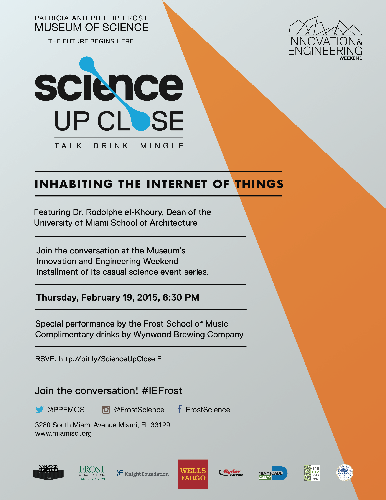 Join us for the second installment of the Museum’s popular Science Up Close event series, an evening of casual science conversations, with this edition featuring Dr. Rodolphe el-Khoury, Dean of the University of Miami School of Architecture. Dean el-Khoury is an architect and designer who researches architectural applications for information technology. His goal is to develop enhanced responsiveness and sustainability in buildings and cities with the idea of embedded technologies. His ideas are at the forefront of the field and he is leading the way as an innovator for the city of the future. Rodolphe el-Khoury describes a not-too-distant future in which “the internet of things” will become a reality, and the line between the digital and real worlds is increasingly blurred. In this world, our homes, workplaces, and the objects within them will all be wirelessly connected, intelligent, and responsive.

The event takes place in a casual atmosphere with live performances by the Frost School of Music and craft beers courtesy of Wynwood Brewing Company. Light refreshments will also be provided. Complimentary admission via RSVP.

Invited guests will join in a workshop about the city of the future led by Gehl Studio. Attendees will participate in a constructive and informative dialogue, responding to artists’ interpretations and other visual prompts displayed on the walls of the Space Gallery to contribute their ideas and express their opinions about how they envision energy, environment, transportation, and architecture and design in the city of the future. Please see separate list for attendees.