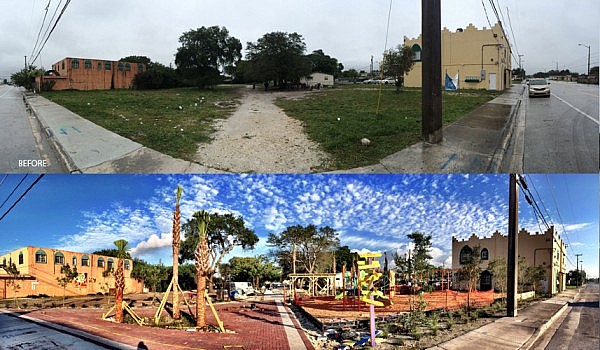 On October 11th, Chair Roberto Rovira and students from FIU Landscape Architecture + Environmental and Urban Design (LAEUD) participated in the Phase 2 installation of Magnolia North Park in Opa Locka, FL, a project designed by the landscape architecture team of Anwar Morales (FIU MLA ’09), Rudolf Uhlemann (Cornell BSLA ’12), and Roberto Rovira. The effort was recently recognized with a 2014 American Planning Association (APA) Florida Award of Excellence in the Grassroots Initiative category with the entry “From Pop-Up to Permanency: Opa-Locka” submitted by the Opa Locka Community Development Corporation (OLCDC) and featured in the OLCDC’s 2013 Annual Report.

Willie Logan, President and CEO of OLCDC, said, “because of [Professor Rovira’s] efforts and those of the studio and other cohorts, he made what would have been a field with play equipment for children into a luscious park to be enjoyed by adults and children alike. [Rovira, Morales and Uhlemann] created a master plan which has enabled us to have a blueprint on how to continue to make the public space truly remarkable.”

According to Chris Davis, Community Organizer of OLCDC, “the development of the Magnolia North Park is the first major collective action that local residents took to improve the community. Through collaborative local projects like this, the OLCDC hopes to continue engaging residents in the social and economic revitalization of the city of Opa-locka.” He is also thankful for the landscape architecture design team. Davis continued, “[their] involvement played a key role in the development of the park. They all understood the importance of this park project to Magnolia North community members.”

“As one of the landscape architects that collaborated on the project, I was very excited to learn about Chair Rovira joining the Magnolia North Park design team,” said Rudolf Uhlemann, Landscape Designer at Arquitectonica. “His involvement, as well as the ‘on the ground’ student contributions, expanded our resource pool, strengthening the project and its impact on the community. Having students involved in community projects like that of the Magnolia North Park has so many benefits . . . students are able to see tangible outcomes of their work.”

“It was a pleasure to work with such a talented design team in this transformative urban project. Anwar is a product of FIU’s Landscape Architecture + Environmental and Urban Design program, and Rudolf and I share a common bond in our alma mater, Cornell. Our collaboration helped tangibly transform a key part of the OLCDC ambitious and inspired transformation for Opa Locka,” stated Rovira.

The Phase 2 installation, completed in October 2014, included the planting of a butterfly garden, picnic tables, and additional shade landscaping for the park thanks to additional funding from the Alliance for Community Trees and a partnership with Boise ASPEN.  A large mural (approximately 50ft x 20ft) by VA Collective, an FIU student-led creative group comprised by FIU LAEUD and Architecture students, will be part of the west wall of the project site.

The American Planning Association (APA) Florida Chapter, which awarded Magnolia North Park the 2014 APA Florida Awards of Excellence, celebrated the outstanding planning projects across the state at its annual conference in September. The Project Awards program provides APA Florida members with the chance to see and learn about development, conservation, government, or environmental projects, where planning has had a positive impact on the outcome. Eligible planning projects are those completed within the last two years of the date of the conference.  The projects are scored by the Awards Jurors based on five criteria:

Information in this article is provided courtesy of Studio Roberto Rovira.