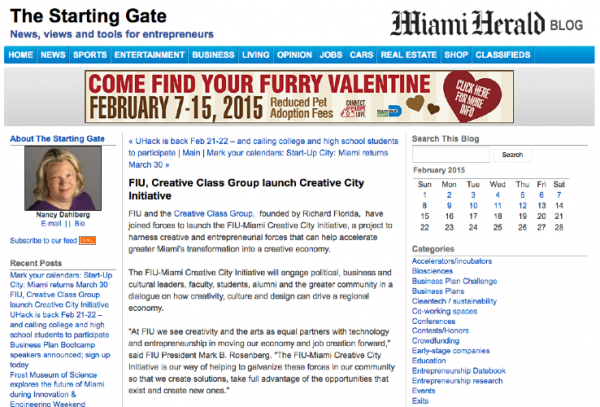 FIU and the Creative Class Group,  founded by Richard Florida,  have joined forces to launch the FIU-Miami Creative City Initiative, a project to harness creative and entrepreneurial forces that can help accelerate greater Miami’s transformation into a creative economy.

The FIU-Miami Creative City Initiative will engage political, business and cultural leaders, faculty, students, alumni and the greater community in a dialogue on how creativity, culture and design can drive a regional economy.

“At FIU we see creativity and the arts as equal partners with technology and entrepreneurship in moving our economy and job creation forward,” said FIU President Mark B. Rosenberg. “The FIU-Miami Creative City Initiative is our way of helping to galvanize these forces in our community so that we create solutions, take full advantage of the opportunities that exist and create new ones.”

The three-year initiative will be based in the College of Architecture  + the Arts Miami Beach Urban Studios, on Lincoln Road.

This first salon held Jan. 29 and open to the public focused on the topic of creating public spaces that ignite creativity and promote community, often referred to as “place making.”  The discussion feature Florida in conversation with Miami Beach Mayor Philip Levine and FIU Department of Landscape Architecture + Environmental and Urban Design Chairperson Roberto Rovira. Florida, Levine and Rovira discussed Miami Beach’s creative future around arts, design, culture, innovation and entrepreneurship and invited ideas on how to further support the revitalization and creative energy around the Miami Beach Convention Center, Lincoln Road and Washington Ave. area. “The key asset to any city is talent,” said Levine. “We are creating an entrepreneurial ecosystem where existing talent will want to stay and work and where new talent will want to launch startups.”

In addition to other salons throughout the year, CCG will conduct research to further understand and define Miami’s creative economy and its impact on the region. The study will examine Greater Miami’s talent base, greatest needs and talent-based advantages.

“Greater Miami is at an inflection point,” said Florida.  “Its economy, historically based on tourism and retirement, is shifting to a more robust creative economy, built around its stature as a global city: its ability to attract talent from Latin America, Europe and around the world; its global airport, its natural assets and quality of place; its arts and culture; educational institutions, and the ongoing resurgence of its urban core. These assets will be critical economic drivers for Miami’s future. We are looking forward to partnering with FIU to bring the city some insights.”

FIU Provost and Executive Vice President Kenneth G. Furton noted that this initiative is directly tied to goals in the strategic plans of the College of Architecture + the Arts and FIU.

“Traditionally universities have served as catalysts for the creative economy, helping to create ecosystems where creative talent and enterprises thrive,” said Furton. “We want to use all of our resources, including the talents of students and faculty in the College of Architecture + The Arts, to spur economic development in Miami and beyond.”