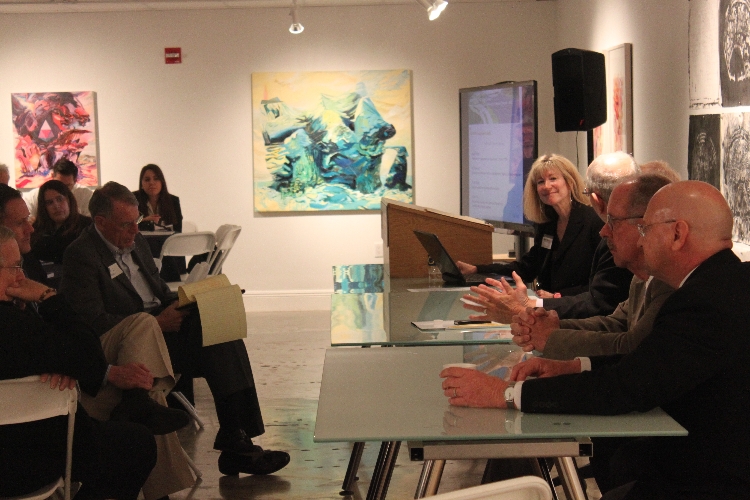 Landscape Architecture and Architecture faculty and students attended the Miami Beach 2100: Sea Level Rise Symposium at the FIU Miami Beach Urban Studios this past Thursday, March 28.  The one-day conference gathered lawyers, engineers, stakeholders, as well as national and international experts aiming to discuss the challenges posed by climate change, sea level rise, and the impact both would have on the highly urbanized area of Miami Beach. The opening ceremony included special guest of the Mayor of the City of Miami Beach, Matti H. Bower, Executive Director of the Association of Climate Change Officers, Daniel Kreeger and FIU’s Dean of the College of Architecture + The Arts (CARTA), Brian Schriner.

The conference consisted of three different panels that focused on the climate change challenge, technical assessments and project strategies and economic perspectives. The symposium included an address by keynote speaker John Englander who presented views from his book High Tide of Main Street. Ideas to foster awareness on the impact of sea level rise were proposed and deliberated by panelists.  “Natural systems are going to be affected by sea level rise and eventually sea level is going to change the types of vegetation” said James Murley, Executive Director at the South Regional Planning Council, regarding some of the effects of sea level rise. Murley addressed the importance of having city mayors, county administrators, state governors and legislature members to work together in order to educate the audience, as well as use national level proposals to implement at a local level. According to Tommy Strowd, Director of Operations, Maintenance and Constructions at the South Florida Water Management District, sea level has risen approximately seven inches over the past 200 years.

Simone Filippini, Consul General of the Netherlands Consulate in Miami, said, “long strategic approaches, budgets, inclusiveness and active approaches” are some of the efforts that could be harnessed to reach a long-term approach. In addition, she shared and recommended innovative solutions that the Netherlands have implemented as a result of sea level rise. One such example is the Delta plan which was established in response to a storm that hit and flooded the Netherlands in 1953. The intricate infrastructure of the new plan keeps southern provinces safeguarded from the ocean. According to Filippini, the plan is comprised of a technique combining structure and working with nature.

The breakout work sessions moderated by CARTA Professors Marilys Nepomechie and Marta Canavés, invited Landscape Architecture and Architecture graduate students to display and discuss proposed solutions for sea level rise in the Miami River Area with panelists. Ideas included the improvement of zoning, planning and the infrastructure of the Miami Beach area.