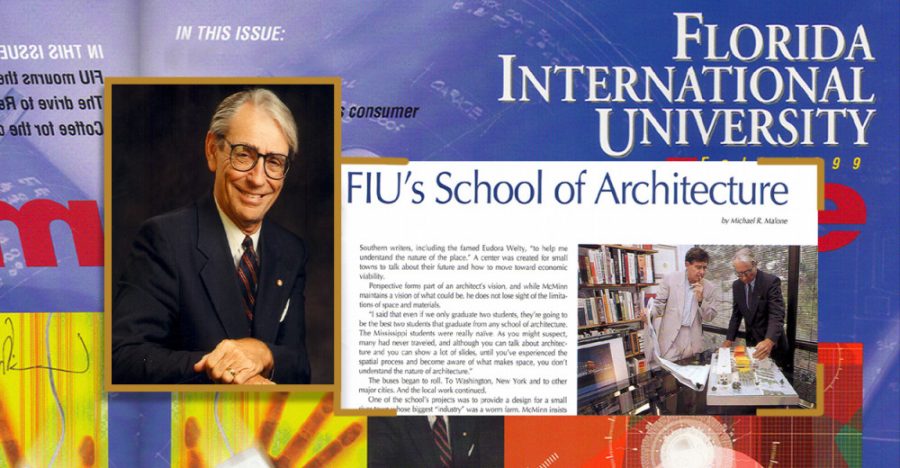 In memory of William G. McMinn, founding dean of the School of Architecture

It is with a heavy heart that we inform you of the passing of William G. McMinn, founding dean of the FIU School of Architecture, now part of the College of Communication, Architecture + The Arts. McMinn passed away on Friday, August 21 in Asheville, North Carolina at the age of 88.

William McMinn’s influence on our School of Architecture, on our faculty colleagues, and on our alumni, has proven both profound and lasting.  He led our Department of Architecture through its first accreditation and initiated a design competition that yielded the exemplary Paul L. Cejas School of Architecture Building. His dedication to making education in the design disciplines rich in content and broadly accessible; his commitment to professional education, to creative practice, research, service, and engagement; and his special dedication to the excellence that has made our success possible; all contribute to a valued and enduring legacy.

A widely respected educator and architect, and a generous mentor for generations of students and faculty, McMinn dedicated almost 50 years to architectural education at seven universities. For that work, he received national and international recognition from the academy, and from the profession of architecture.  A Fellow of the American Institute of Architects and of the American Academy in Rome, McMinn was also recognized with the Distinguished Professor Award from the Association of Collegiate Schools of Architecture. He began teaching at Texas Tech University in 1956 and went on to teach and direct architecture programs at Clemson University, Auburn University and Louisiana State University.  During his time as an educator, McMinn also practiced professionally, serving as Director of Design for the architectural firm Six Associates in Asheville, North Carolina. Several of his professional projects received design awards. In 1974, McMinn became the founding dean of the School of Architecture at Mississippi State University, creating its architecture program and leading it to full accreditation.

Appointed to the National Architectural Accrediting Board (NAAB) in 1980, McMinn was elected president three years later. During his tenure as president, working in partnership with the collateral organizations of architecture, he established the NAAB’s “New Procedures and Criteria for Accreditation.” He chaired NAAB reviews of 24 architecture programs, including those at Harvard, Columbia, Princeton and UC Berkeley.

Beginning in 1984, McMinn served as dean of the Cornell University College of Architecture, Art and Planning (AAP).  Over the course of his 12-year deanship, McMinn founded the Cornell in Rome Center.  He was instrumental in establishing an undergraduate program in urban and regional studies and strengthened the graduate programs across the college.

William McMinn joined the FIU family in 1996.  He would become the founding dean of our School of Architecture the following year.  The new school incorporated pre-professional undergraduate programs in architectural studies and interior design; and graduate programs in architecture, landscape architecture and environmental and urban systems. Under his leadership, the professional program in architecture earned full accreditation by the NAAB.  As dean, McMinn was instrumental in shepherding the design and construction of the Paul L. Cejas School of Architecture Building at the FIU Modesto Maidique Campus.  He initiated the international design competition that brought Swiss architect and Columbia University dean Bernard Tschumi, in collaboration with Bruno Elias Architects, to create the award-winning, much-published home of our new school.  He led the growth of the school’s faculty, vastly increased student enrollment, and championed its earliest study abroad programs, once noting that “the immersion into a foreign culture, even for a short time, provides an important measure of one’s own values, [an opportunity] to grow intellectually, professionally and personally.”

McMinn retired from FIU in 2004, having served as dean of the School of Architecture, and later as a member of its senior faculty, for eight years.  The national boards of the AIA and ACSA named him the 2006 recipient of the Topaz Medallion for Excellence in Architectural Education. Nationwide, the Topaz Medallion is the highest honor that can be conferred on any individual in architecture education. It recognizes someone who has made exceptional contributions to the discipline, whose teaching has influenced a broad range of students, and who has helped shape the minds of those who will shape the built environment.

We remember and appreciate William McMinn’s service and his profound impact on our FIU community. McMinn is survived by his wife Joan and their two children, Kevin and Tracey.

Our thoughts and prayers are with his family and friends during this difficult time.