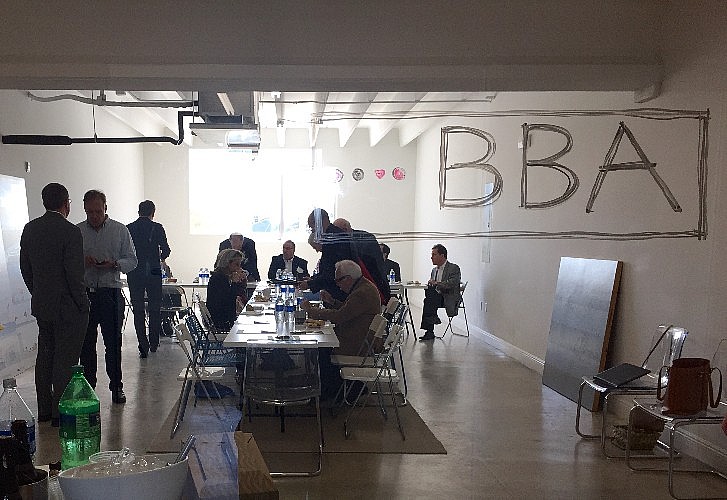 Gus Berenblum, principal of Berenblum Busch Architecture (BBA), generously hosted the CARTA Advisory Board meeting at his office in the Wynwood district at noon on February 9th, 2015.

During this very productive meeting, Dean Brian Schriner discussed CARTA 2020, the Miami Creative City Initiative with the direction of Dr. Richard Florida, and the Bauhaus Miami with the collaboration of Dr. Claudia Perren, Director of the Bauhaus Dessau.

Larry Kline from Perkins & Will presented the new partnership with CARTA for the creation of a new Healthcare Design track in the School of Architecture.

Bernardo Fort-Brescia, founding principal of Arquitectonica, was recognized for having the winning bid for the redesign of the Coconut Grove Playhouse.

Alfred Karram Jr, Chairman of the Urban Studios Advisory Board, made a presentation on their involvement with the City of Miami Beach Centennial.

Rick Tonkinson, Chairman of the CARTA Advisory Board, discussed Josh Oberhausen speaking to the Communication Arts students, the status of hiring a Career Development Officer, and the grand opening of the RCCL building at the FIU Modesto A. Maidique Campus on March 20, 2015. Dean Schriner is making arrangements for the board members to attend the grand opening and to receive a private tour.

Rick also discussed the Martin and Connie Silver Award, which is a scholarship for students to explore how to assimilate artwork and collections of art into their architecture designs.

Rick announced the School of Architecture Career Fair on March 25th and Jason Chandler, Chair and Associate Professor, provided the details at the board meeting.

Rick let the board know that the Department of Interior Architecture is ranked in the top 10 in the nation by Design Intelligence and Janine King, Chair and Associate Professor, stated that 1,108 professional practice organizations participated in the ranking.

Bernardo Fort-Brescia and Julian Kreeger, President of Friends of Chamber Music of Miami for 25 years, had a very insightful conversation that started with Bernardo asking “What is the ideal size of a venue in order to be able to create the right amount of buzz (sizzle) for a theatre or music production?” A discussion ensued over this fundamental and critical question, which that is often never addressed. “Buildings are overbuilt and there is too much capacity so when it is half full, it still looks empty,” said Bernardo. Julian thought that 300 seats is small enough to create a demand for attendance. “This conversation was in essence why the College of Architecture + The Arts are combined at FIU because it brings the two points of view together. At most universities, this conversation would not take place. With most cultural arts centers, they are built over capacity because the decision makers want something grandiose. It is their way or the highway so when it is built, presenters have to deal with trying to fill up the room. Chamber Music does not need a 2,600 seat auditorium,” said Rick Tonkinson. “We just witnessed in a conversation the unique philosophy of CARTA,” added Rick.

Rick was pleased to announce that David Harper, President and CEO of HADP Architecture, is joining the board. He named the atrium of the Green Library at FIU and is a major donor.

The next meeting will be at hosted by Daniel de la Vega in April. Daniel is president of ONE Sotheby’s International Realty.