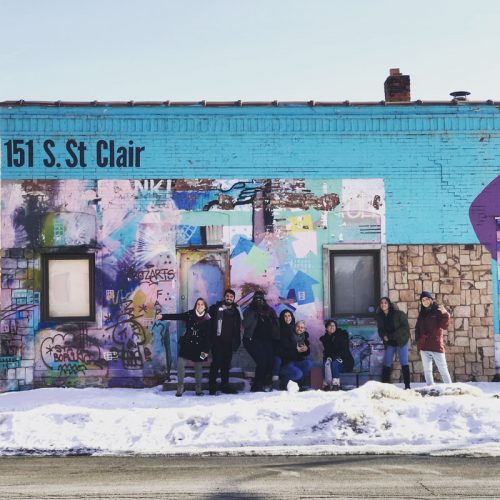 Students from Professor TJ Marston’s Spring Landscape Architecture Graduate Design 4 Studio visited their site in Toledo, Ohio this past weekend. Local members of the design community from the Toledo Design Center, Toledo Warehouse District Association, The Collaborative Inc., ConnectToledo and Midstory took time out of their weekend to speak with the students, tour through the warehouse district and discuss design ideas.

The visit culminated in a six-hour design charette where students developed conceptual strategies aimed at utilizing public space as a catalyst for revitalizing the Toledo Warehouse District in a collaborative design environment. The visit was a great success, and the entire group left feeling excited, energized and in love with Toledo, Ohio.

​Read more about the studio course below:

STUDIO STORYLINE
Just a generation ago Industrial America was the epicenter of innovation. Over the last 50 years, it was hit hard by economic shifts driving manufacturing and innovation away. Entrepreneurial activity declined and cities built on the Industrial Revolution declined along with it. While many large cities along the coast of America survived to gain economic prosperity decades later, Midwestern cities were left behind. Populations continued to decline while crime and poverty rose.

In the last three years startup activity has risen across the whole of America at unprecedented rates. But the shifting energy does not erase the abandoned factories and storefronts at the heart of many Midwestern cities. The Warehouse District in Toledo, Ohio was one of many cities left with these scars at the heart of its downtown core. But in Toledo, grassroots efforts from both young and older generations are reviving and re-purposing historic factories and storefronts. The exciting architectural revival in the heart of the city is bringing downtown back to life. People are moving in. With this surge in population comes a need for quality public space, something that was not planned into the historic fabric of the district. Former working waterways need re-imagining. Roadways and streetscapes need smart and safe connections. People need beautiful spaces to live.

In recent years masterplans for downtown Toledo and the Warehouse District have showed renewed interest and visions for reviving Toledo as a center for innovation and entrepreneurship. With the groundwork complete, graduate students from FIU’s Landscape Architecture + Environmental and Urban Design Department will continue to explore the possibilities of this vision and the districts connection to the water and surrounding communities through the design of the public realm.