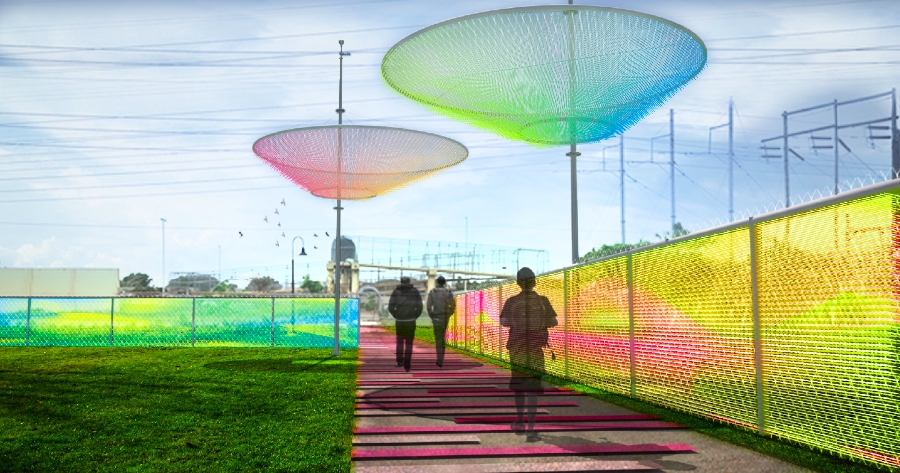 Broward Representatives Approve Design of the “Art of Community” Project

The Community Foundation of Broward and representatives from the Broward YMCA and the City of Lauderhill recently approved the design for the “Own the Overpass” project  in the City of Lauderhill, FL, by Roberto Rovira and Jacek Kolasinski (respective chairs of FIU Landscape Architecture and FIU Art + Art History).  The project is funded by an “Art of Community” grant from the Community Foundation of Broward.

Roberto and Jacek have been working with community partners from the City of Lauderhill and the Broward YMCA to envision the transformation of the overpass structure. The design addresses the challenges of an imposing and divisive bridge by introducing large scale shade structures that provide shelter and protection as much as they aim to reflect the identity of the surrounding community.

In attendance at the design presentation in July were Richard Kaplan, Mayor of the City of Lauderhill, Glenn Weiss, Project Manager for Public Art, Streetscapes and Civic Enhancements at the Community Foundation of Broward, Sheryl Woods, President and CEO of the Broward YMCA, and Bruce Griffin COO of the Broward YMCA, as well as the students and directors of the Lauderhill Y, Meredith G. Sowers Director of Community Health Innovation, and Jocelyn Boyd Executive Director.

Graduate Assistants for the project include: Amanda Vargas-Love and Andrea Sandoval (FIU Landscape Architecture), as well as Joe Locke and Nick Gilmore (Art and Art History).

PrevPrevious StoryFIU LA Takes Part in 2013 FLASLA Annual Conference and Expo
Next StoryCrucial Tips to Starting a Semester Off Right!Next