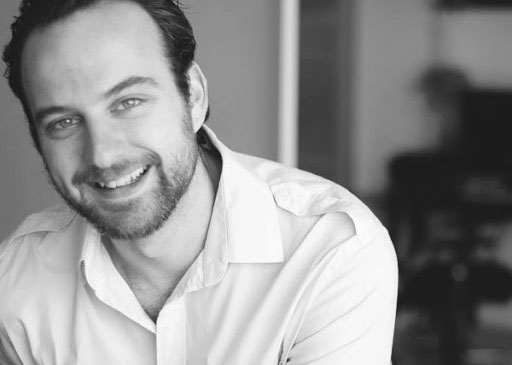 Even before graduating from FIU, Fueyo and his mentors knew he had knack for digital designs. 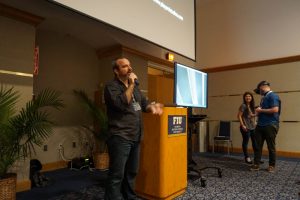 “When Carlos was a student in my class, I could never get him to bring in his models,” says John Stuart, associate dean for cultural and community engagement and executive director of Miami Beach Urban Studios. “He would have these beautiful designs and he would only ever show them to me on his computer. It took me a while but I finally figured out why – they were all designed entirely on his computer, there was never a physical model.”

Fueyo has held a deep appreciation for visual effects since he was a child. He constantly questioned how the designs and animation for cartoons were made, but it wasn’t until he was in school that he began to see the connection between visual effects and architecture.

“I chose to study architecture and I’ve never had a doubt about it,” says Fueyo. “I’ve always loved architecture. But while I was in school, I began to think more about film because there is a lot of similarities between the two.”

Fueyo recently attended FIU’s School of Architecture D3E conference where he met with students to review their portfolios and give a keynote speech, Designing Cinematography.

D3E (Designers Engage, Empower, Emerge) is an all-day conference that brings together all School of Architecture students, design professionals, educators and manufacturer representatives for a variety of workshops. Students learn about different career paths within the industry, receive feedback on their portfolios and resumes and are introduced to cutting-edge ideas that encourage them to rethink the way they design. 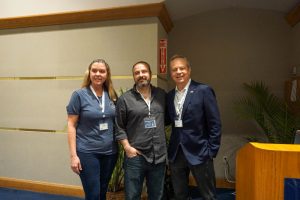 While in school, Fueyo was inspired by American film director, Joseph Kosinski, who at the time owned a production studio called KD Lab. Kosinski was a trained architect who graduated from Columbia University and went on to blur the boundaries between architecture, film and graphics.

“My first year studying architecture, I reached out to Kosinski’s studio, but never heard back,” he adds. “Years later I was actually able to work with him on a commercial for Assassin’s Creed.”

Fueyo has more than 15 years of experience working on films, commercials, game cinematics and dark rides. His work in the film industry included creating visual effects and computer graphic environments through modeling, lighting, texturing and animation for a variety of films like Priest, Super 8, Independence Day: Resurgence, Avengers: Age of Ultron, and Mission Impossible: Ghost Protocol – which he relates back to the core design techniques present in architecture.

“Working in film shows you that there’s so much more that goes into making a movie than we realize,” says Fueyo. “Just like with architecture, interior, or landscape every little detail has to be created.”

Fueyo is currently the creative director of playard studios, a production, post-production and creative studio based out of Miami Beach Urban Studios that experiments with multimedia content including documentary films, AR & VR experiences and 3D printing. 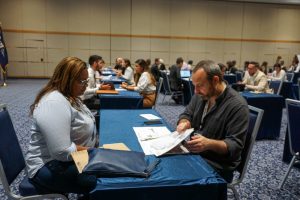 At the conference, Fueyo gave the School of Architecture students a resounding piece of advice.

“If you see someone out there who you feel inspired by contact them, you never know what will come of it and always remember your personal projects matter. It’s not just about what you do in your offices. Put those things in your portfolio, have a voice and make it shine.”

The D3E conference, held at the GC Ballrooms, appealed to students from all three School of Architecture disciplines – architecture, interiors, and landscape architecture + environmental and urban design. About 250 attendees made up of 150 students and 100 professionals representing over 60 design firms and 24 FIU alumni participated in the event.