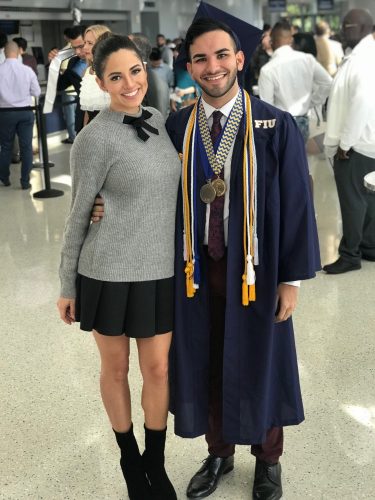 Crossing the stage for earning Bachelor’s degrees in both Broadcast Media and International Relations, Eric Duran is a Fall 2017 graduate of the FIU School of Communication + Journalism and FIU Honors College. Eric is also a recipient of the Pamela Silva Conde Scholarship, which benefits first-generation students. However, this scholarship is more than just an allotment of money awarded; it involves a personal mentor ship from Pamela Silvia Conde, herself.

Pamela Silva Conde ’03, MBA ’12  is a six-time Emmy award-winning journalist and co-anchor of the Univision Network’s weekday newsmagazine “Primer Impacto” (First Impact), one of the highest-rated programs in the United States and in 12 Latin American countries. Since she joined the show in 2011, she has covered major national and international news stories; including every angle of the terrorist attack at the Boston marathon, live from Boston, as well as Pope Francis’s visits to the United States and Mexico.

Every year, Pamela invites her scholarship recipients for a tour of the Univision studios, allowing them to watch her in action during her live show “Primer Impacto”.  In addition, she also hosts the Annual Pamela Silva Conde Scholarship (PSCS) fundraising event, where she raises funds towards her First Generation Scholarship Endowment as well as promotes FIU and the First Generation Scholarship Program to a room full of media/communications professionals.  She is a true champion for FIU and First Gen and an amazing example of an alumna.

Eric commented on how this scholarship has affected his academic career: “The Pamela Silva Conde First Generation Scholarship made a difference in my education by recognizing a need to support students like myself. The scholarship was more than financial assistance; it provided me with networking opportunities in the media industry and exposure to professionals that are now my coworkers here at Univision 23 Miami.”

FIU’s School of Communication + Journalism Congratulates Eric on his many achievements and thanks Pamela for her support in truly making a difference in the lives of first-generation students.