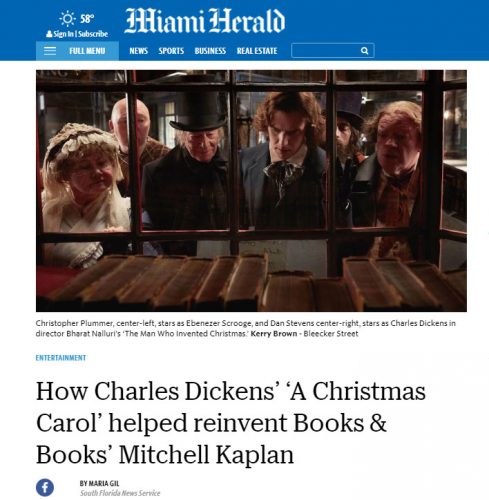 Could you tell us a little bit about yourself and your article?
My name is Maria Gil and I am a Journalism Senior with a minor in Japanese. I’m just a simple student who loves to read and enjoys writing about what I read, so it led me to write book reviews on a personal blog.

At the start of the semester my professor, Dan Evans, told us to pick a beat (a topic) for the semester and I wanted to do book reviews, so we compromised on the subject of reporting on the happenings of the book/literature community in South Florida. My articles are usually about books in some way or another: a book turned movie, a book turned art exhibition, FIU students with books at the book fair, and books making the Amazon best seller list by a small indie publishing company.

What led to the creation of this article?
The Man Who Invented Christmas came to be because the class was assigned to reach out to influential people in the South Florida book community. That is how I ended up calling Mitchell Kaplan, Books & Books owner, now turned film producer. He told me about The Man Who Invented Christmas, the movie he was producing. He also told me it was based on a book, so when I Googled the author’s name, I found out that Les Standiford was an FIU professor. Then, I wrote my story.

Then in November, one of my classmates, Jesse, was told by Joan Chrissos of the Miami Herald to write about Kaplan’s film (because he interns at the Herald) and he said “I actually know someone who already covered this topic”. He sent Chrissos my article that was published in SFNS and she liked it! She later contacted Professor Evans, who contacted me letting me know that they wished to use a reworked version of my piece to publish late November. I worked to change my article to a stronger focus on Mitchell Kaplan rather than a Les Standiford focus.

What did you learn from this experience of how reporting can go to the next level?
My experience was a bit overwhelming because I had to almost completely rework the original story I wrote for SFNS. If you read the SFNS article and the Herald article you see that they are two very different stories. It made me realize the hard work the truly goes into writing and reporting. I also learned that reporting isn’t a solo thing, because you have an editor who wants you to write the best story possible. Joan Chrissos gave me a lot of really good feedback that helped me write a better feature and she also gave me more ideas on what to focus on in the article. She instilled in me ideas and questions that I did not think about when I first began the story that got published on SFNS.