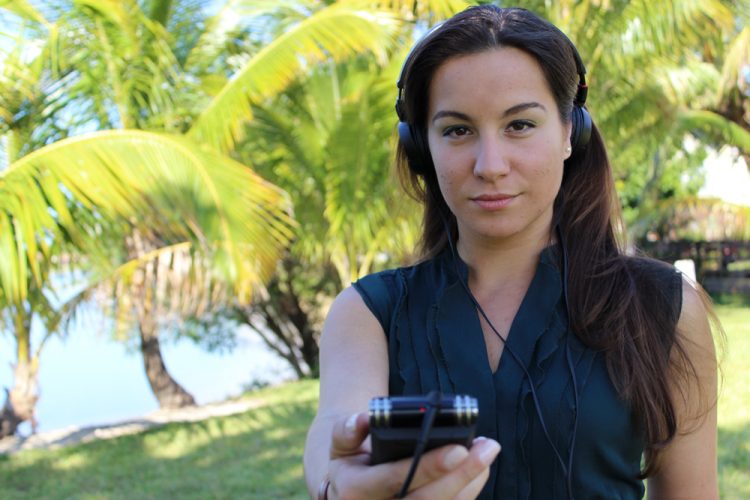 Jessica is currently an anchor/reporter at WGCU Public Media (radio) in Fort Myers, Florida and was able to answer a few questions for us about her career path to where she is today.

Degree Earned and Year Graduated: BA in Communications with a certificate from the Honors College April of 2014

How has FIU helped you get to where you are today in your career?
FIU Professor Michael Sheerin announced an internship opening at WLRN, NPR for South Florida during our multimedia class in 2012. I applied, got the internship, and that grew into an award-winning public radio career about six years later. I thank Professor Sheerin for making that opportunity available to me and I thank FIU Professor Allan Richards for recommending me to WLRN. In addition, as I was learning how to edit audio, video and photos at FIU, I was simultaneously doing that internship – so the university courses were helping me excel in my internship as a multimedia reporter.

What path did you take to attain your current career?
I started as a digital intern at WLRN, which consisted of migrating content from an old website to the current one. I did what was asked of me, but I also took it a step further. I rented a recorder from FIU and used it to interview people standing in Miami-Dade County’s notoriously long early voting lines in 2012. That turned into my first story. After pitching and completing five stories for WLRN, the editors began calling on me to report stories for them. I was a freelancer there while I was a student. That working relationship spanned about two and a half years. I was then hired by WGCU News , NPR for Southwest Florida, in April of 2015 to be anchor/reporter, where I’ve won multiple awards for writing, feature reporting, investigation, newscasts, and talk show.

What’s been the coolest thing about your job so far?
The coolest thing about my job so far has been covering Hurricane Irma in September of 2017. It was tough, but rewarding. For about eight hours, a small staff of just six remained live on the air while the storm barreled through our listening area on the west coast. We kept calling police stations, fire stations, hospitals and more to fill our airwaves with good information for listeners who may have lost power and cell service. We all took turns producing and live hosting during the storm. I also slept under my desk to report on the aftermath of the storm for six nights. In the days after the storm, listeners thanked us for our storm coverage, and that made all the exhausting work worth it.

What does a typical day for you look like?
Every weekday, I work on stories between the hours of 9AM and 3PM, before prepping for my afternoon anchoring duties. I host NPR’s All Things Considered for our local community between 4PM and 6PM, where I’m constantly updating local and state news events for our listeners. That includes breaking news events, like the Valentine’s Day massacre at Marjory Stoneman Douglas High School in Parkland.

How does your job connect back to your coursework?
I still contact my past FIU professors for references and for advice. I found that my first connection to the journalism world was my professors. They’re great resources to have as a student and as a professional in the industry.

Were there any classes or professors that influenced where you are today?
In addition to the professors I mentioned earlier, Professor Elizabeth Hanly, who taught the Honors College course Creative Writing Non-Fiction, really helped shape my writing for radio. Thanks to her, I learned to “trim the fat” in my writing and most importantly, she taught me “to go deeper” when it comes to humanizing a story. I’m so grateful to her for helping me find my writing style. Also, Professor Fred Blevens taught me about ethics in journalism, and I still contact him for ethical advice to this day.

What advice do you have for students interested in a career in Journalism?
Journalism students need to seize any and every opportunity that comes their way. The first opportunity is in the classroom. Show up and do your best. Impress your professors because they’re your first editors. They can also help you grow in your career by connecting you to others in the industry. Take internships, even if sometimes they’re not paid. Work hard and people will notice you.