Journalism Alumna Reports from the Eye of Dorian Amid Destruction

You rode out the storm in Marsh Harbour, Great Abaco, the island most heavily devastated by the Hurricane. What was the general feeling on the island leading up to the storm?
The people of Marsh Harbour, and the Abacos, in general, do not mess around when it comes to storms. When I first arrived in Marsh Harbour on August 30th, Hurricane Dorian was a Cat 2 storm. People were preparing, but they weren’t in a panic. A lot of Bahamians are used to storms and they do prepare accurately. The grocery stores were packed, but everyone was polite and there was nothing chaotic going on. It wasn’t until Dorian increased to a Cat 5 that people really started to worry.

During the storm, you talked about it being one of the most terrifying experiences in your life, what made you characterize the storm that way? (Was it the intensity, the length of time it would spend over the island, a culmination of both?)
This storm was a monster. There’s no other way to describe it. Not only did I ride out a Cat 5 storm, but I was in the eye of the storm. My photographer, Brian Ely, and I were in, what we believed, was a stable structure at the Abaco Beach Resort. As the eyewall moved through, we saw a roof from the building next to us blow off, doors blown off their hinges, the railings on the balcony were picked up like paper and blown away, and even shutters and hurricane impact windows were no match for Dorian. Not to mention the storm surge that kept rising and rising.

It looked like a rushing river and many people were caught in it and had to be rescued. I was terrified because I wasn’t sure our hotel would be left standing after the eyewall came through and I was worried about being trapped or severely injured. There was one incident where I was in the bathroom hiding and the ceiling started to crack open. I ran out just in time before the drywall fell. Looking now at all the destruction left behind, I am still in shock that we made out unscathed.

You have reported live on other hurricanes, what leads you to do on-scene reporting on them and what do you hope people get out of your reporting?
I was dispatched to the Bahamas by the managers at the station. My managers know I am always ready to go anywhere. I have a “go-bag” with me at all times that has clothes and toiletries and my passport. It’s part of the job. Sometimes we find ourselves in dangerous situations, but we do our best to stay safe. During a hurricane, it is vital to be reporting and sending out the information as quickly as possible. People depend on us to let them know what is going on and what to expect. I had many Bahamians come up to me after the storm passed saying thank you because they followed my coverage and it kept them informed and it kept them safe. That’s the most important thing we can do as journalists. I am always 100% committed to telling the story, no matter the circumstances involved.

Following the storm, you spent some time in Marsh Harbour before being evacuated to Nassau, what was the feeling on the island after the storm passed?
Like many people, we were stuck in Marsh Harbour for days. The storm rolled through Sunday morning and lasted until Tuesday. There was a blackout period where I couldn’t reach anyone back at the station because it wasn’t safe to use the satellite phone my station had given us before we left. To use the phone, you have to stand outside to get a clear signal. Our last call to the station was Sunday at 2pm, and then for 15 hours, it was impossible to make a call because we were dealing with 185mph sustained winds and gusts up to 220mph. Everyone back home was very worried for us. Finally, we were able to reach the station and report live through the phone. My managers then started working behind the scenes to get us off the island. 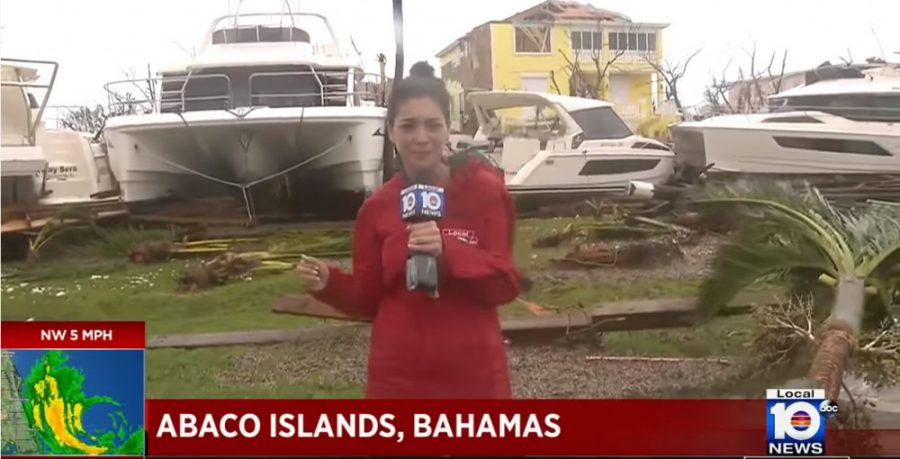 We ended up consolidating with the national ABC news crew in their condo. We were the only TV crews who covered the storm. In their condo, there was only one den and one room that wasn’t damaged and a total of five people ended up cramming together and sharing food and water we bought before the storm. It’s a good thing we all got along very well! We would leave the condo in pairs and shoot video and interview people. The overall feeling was shock and desperation. Many people lost everything and had nowhere to go. They were desperate for food and water and even cellular service because all the cell towers were down. It was hard to see people walking barefoot through flooded streets, holding their children and even pets, trying to find shelter. The roads were impassable for days because of water and debris. Even the police force was walking on foot to try and get to the hardest-hit areas.

It wasn’t until late Tuesday afternoon when my station sent a helicopter to evacuate us to Nassau. When we landed in Nassau and went live right away, we were able to show a video of the damage on the island. For everyone at the FOB (a private section of the airport), it was the first time they actually saw images of the devastation because no one was able to reach anyone from the island. It was a big moment for me as a journalist to know that we were able to get the video and information out there to help speed up the recovery process for the Bahamas.

What is the best way people can help? What are people actually on the ground in need of?
Right now, people need everything. From food to baby supplies to even pet supplies. If you’ve seen the images, you know that people literally lost everything. Most people who evacuated left the island with whatever they had on their backs. For many, they have no idea what will come next. You can help by donating through a reputable organization like the Red Cross, but many companies and non-profits are also helping out.

The absolute best way you can help, though? Go visit the Bahamas. The Bahamas rely on tourism and the Abacos and Grand Bahama are the second and third most visited islands in the Bahamas and contributed many tourist dollars to the economy. Nassau was not damaged at all during the storm and the Tourism Ministry is pushing for people to go visit. Also, Exuma and Eleuthera were untouched and are great places to visit. As money goes into the economy, all of that will help in the rebuilding process. It’s a great way to help out and also enjoy the beautiful Bahamas. Trust me when I say that the Bahamians are some of the nicest people I’ve ever met. They’re resilient and I know they will rebuild and be stronger than ever.

So here we’d like to switch to specific questions regarding your experiences at FIU and post-graduation. How has FIU helped you get to where you are today in your career?
FIU is where it really got started for me. I knew since I was 12 that I wanted to be a journalist, but when I actually started the program at FIU, that is when I really knew this was my calling. One of my professors, Neil Reisner, was really instrumental in creating the foundation for my career. He made sure everyone in his class got “real” experience by making us go out into the community and report on things that made us uncomfortable or were out of our comfort zones.

That’s a big thing with this career; you are constantly put in situations out of your norm and learning how to deal with that in college really helped… I hope the university continues to see the value in journalism and continues to invest in the program.

What path did you take to attain your current career?
It started my junior year of college. I got an internship at Local 10 News and that’s really when I learned the ins and outs of this business. I also interned at NBC 6. Shortly after graduating, I landed my first on-air gig at the ABC affiliate TV station in Lafayette, LA. While there, I was a one-man-band reporter. I shot, wrote, and edited all my own stories. After two years, I moved to Pensacola, FL to work as a reporter for the ABC affiliate there.

After another two years, I finally landed a reporter job at Local 10 News here in my hometown. I’ve been with this station for five years and I am now the noon and 3pm anchor, in addition to reporting. I’ve also snagged two Emmy awards along the way. All of that combined, I’ve got nearly a decade of experience as an on-air journalist.

What advice do you have for students interested in journalism?
Stay hungry. This career will test you, not just professionally, but emotionally as well. This is hard work and not for the faint of heart. If you want it, go for it, but don’t be afraid to move to a different city or start off small. You have to be willing to go anywhere. Also, don’t ever lose sight of the importance of journalism. Reporters are the 4th estate – the watchdogs. Without a free press, there would be no democracy. Take your work seriously and love it every single day. 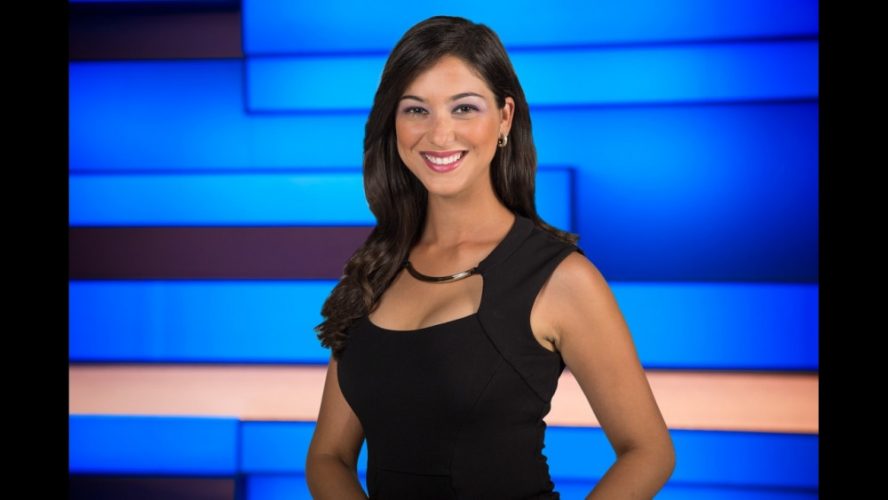 It takes a lot of tenacity and patience. Things won’t happen right away and it’s extremely frustrating, but you have to keep applying and searching for job openings. For every ten news directors I would write to, maybe one would write back. I kept telling myself someone at some point would want to hire me. I think what made the biggest difference for myself was that we both were willing to move anywhere. A lot of young journalists are afraid to leave Miami or even Florida, but that wasn’t the case for me. My love for journalism outweighed my love for my city. I consider myself lucky to be working in my hometown, but even if I never made it back home, I would still be a reporter somewhere. I can’t see myself doing anything else for the rest of my life. Also, don’t get me wrong, talent plays a huge part. The truth is, this is a business where some people just have that “it” factor and it’s hard to explain. I think if you’re naturally curious, smart, a hard worker, and in some ways charismatic (not camera shy), you’ve got a shot at making it in this business!