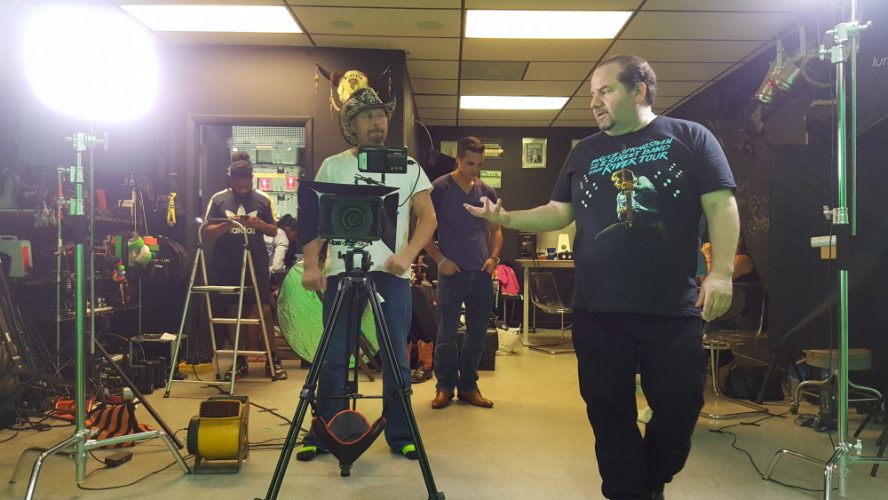 Where do you work?
As a producer/director, I run a multi-media production company based in South Florida called Eric Kline Productions. We create long and short-form video content for a variety of entertainment sectors.  The company partners with celebrities, experts, companies, brands, and artists to produce documentaries, commercials, docuseries, and reality shows.

How has FIU helped you get to where you are today in your career?
During my first week at FIU, I remember meeting with a guidance counselor and she quickly introduced me to Bert Delgado who was running the video production sequence. I sat in on one of his classes. I liked his no-nonsense style. He commanded the class in a unique way. I signed up for his class and the video sequence.  We immediately clicked. I never looked back.  Bert became the first and most important influencing factor during my time studying at FIU.

FIU’s influence on my career continued the year after I graduated.  I still stayed in touch with Bert and was finishing off a video project when I met an FIU student named Max Gousse (who is now a music and film executive) in the FIU edit suite.  Max and I hit it off and became fast friends.  While he was attending school, he also was working twenty-five blocks south on Biscayne Blvd at Video Jukebox Network (which later became the Box Music Network and, ultimately, MTV2).

I had shot several music videos and a few commercials during my junior and senior years at FIU.  For my senior project, I partnered with my classmate and friend, FIU grad Aaron Oatley. We produced a real documentary-style video for a song called “Where Did the Sound Go?” written by my cousin, LA artist Doc Lawrence.  I had that video and a few others on my demo reel.

In early 1991, Max showed my reel to some of the production staff at the Video Jukebox Network and soon thereafter I started freelancing for them.

What path did you take to attain your current career?
I started producing album promos mainly for hip hop and R&B artists at The Box. Keep in mind that I was a singer-songwriter guy, so this was a completely new experience for me.  I like to think that I rose to the challenge and continued to excel at The Box. Several years in, I found myself starting to produce and direct what we called Boxtalks (album features), commercials (promoting the artists album, singles & videos), and sweepstakes for artists like Bon Jovi, Meatloaf, Geto Boys, Hootie and the Blowfish, Gloria Estefan, Will Smith, Diddy, and Mariah Carey to name a few.  It was quite an experience.  When the Box was purchased by Viacom and merged into MTV2 in 2000, I formed my own production company and continued working for several record labels in a freelance capacity.

In 1999, I self-published a book 2 CD set and started a brand called Inside the Music Business (we expanded to a radio show, seminars, coaching), but the industry was in a state of metamorphosis, people were stealing music through peer-to-peer file sharing, so it was tough to make a living.

I got back into production several years later, at the time when reality shows started to become mainstream.  My college friend (EVP/ Director of Art Miami) Nick Korniloff called me one day and asked me to take a meeting with a hair salon in Palm Beach Gardens to possibly develop a show. I created a sizzle and presentation reel for the salon and called it “Hair Boss”.  Presently my company is developing two shows along with three documentaries.

What’s been the coolest thing about your job so far?
The coolest thing is probably that I’ve been able to work with and help create content for some of the biggest artists on the planet. At the same time, it is quite gratifying to be part of a team that has helped break artists.  The Box Music Network (which was headed up by legendary music executive Les Garland) was known for breaking new artists at a time when few outlets would even give an indie artist a chance.  Today, it’s a whole different world.

What does a typical day for you look like?
Every day is different. Of course, it depends on what stage projects are in.  Sometimes, I’ll spend all day with my dad (he truly is my hero – he just turned 99).

Production-wise, I’m presently in the middle of shooting three documentaries for world-renowned artist and sculptor Yaacov Heller.  One of the short docs is the making of a bust he created for Benjamin Ferencz, the last living Nuremberg trial lawyer.  These two men are legends in completely different ways.

Most days I’m either editing or consulting with my editor and/or Yaacov.

How does your job connect back to your coursework?
My career certainly stems back to my FIU days. It was there that the building blocks of my skills as a director/producer were first revealed and developed.  I cannot speak enough about how pivotal those two years at FIU were for me.

What advice do you have for students interested in a career in video production/content creation?
It’s an interesting climate in 2019. With the advancement of technology in the video production space including the use of cell phones, digital cameras, drones and the proliferation of online content outlets like YouTube, Netflix, Hulu, Amazon, there are more opportunities than ever before to make a living as a producer of video content.