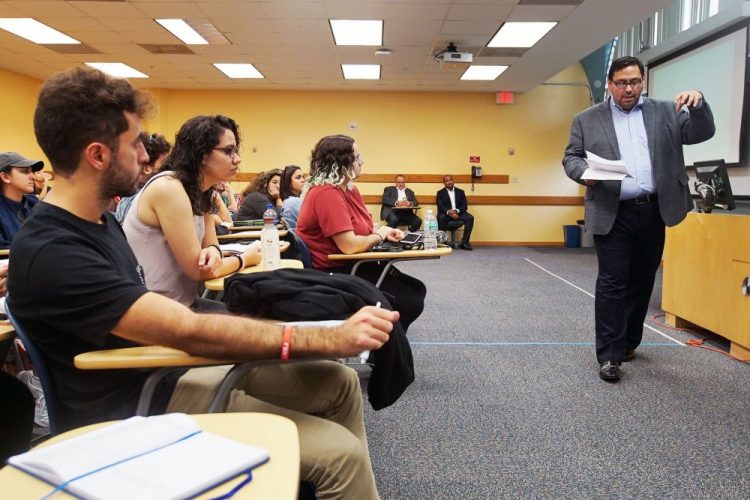 Journalism is “A current reasoned reflection, via published medium, of society’s events, values, and needs” said Ramon Escobar, Vice President of Talent Recruitment & Development and Vice President of Diversity & Inclusion for CNN Worldwide, to students in Dr. Susan Jacobson’s Intro to Television course during SCRIPPS Day at FIU’s BBC Campus. He said that there are different societies, each with unique values and needs and it is important that journalists are able to determine them and have an internal responsibility and ethical desire to deliver information to the best of their ability.

“This is where my career was made”, said Escobar, referring to how Miami and South Florida helped launch his career.

Escobar began the interactive class session by discussing the First Amendment (freedom of speech) and how it applies to everyday life and journalism. He then spoke on the history of the news regarding the government and big business and how journalism had huge involvements in major historical events (i.e. delivering the news via the radio in WWII). When mainstream television came to be, it had extensive influence regarding events such as the Civil Rights Movement and Vietnam. People from all over the country were able to view dramatic images on the television as if they were seeing it happen before their own eyes, thus giving them an emotional connection to current events.

This led to the discussion of ‘manipulation through the power of image’ and how events like the Watergate scandal were the beginning of the new evolution of Watchdog journalism. Escobar stated that the press began to play a role in politics and cable channels began to emerge from where there were only local broadcast stations. This led to the importance of revenue generation in conjunction with the dependence on ratings and the selling of ads and channel subscriptions.

As Escobar approached more modern times in his discussion, he pointed out that, with the emergence of the internet, and more recently, social media, anyone can be a journalist by simply snapping a photo with their smartphone. This is a scary concept, in Escobar’s opinion, as it puts the individual’s credibility

and responsibility in question. This goes to show that the definition of journalism has evolved throughout history.

Ramon Escobar concluded his class session by connecting with the students with the statement “My story is your story”, reflecting on his struggle to overcome prejudice throughout his life and ultimately how it led him to where he is today. Following the discussion, Escobar answered student questions and spent a few minutes networking with the class, which was made up of students from the FIU School of Communication + Journalism.