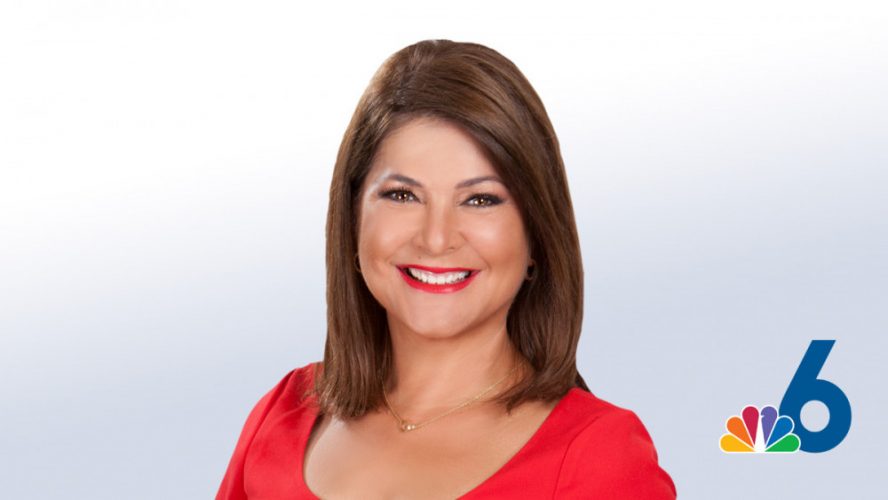 During the month of October, in celebration of Hispanic Heritage Month, hosted a virtual discussion about the changing economic and political landscape of members of the Hispanic community. The event, “A Conversation with Jackie Nespral,” was organized by Sonja Montas-Hunter, assistant vice provost in the office of student access and success and Jeannette Cruz, director of student support services, and was moderated by the FIU School of Communication + Journalism’s (SCJ)   assistant professor and faculty internship & career coordinator, Lilliam Martinez-Bustos.

“As a Hispanic-serving Institution, it is important for FIU to celebrate and recognize the achievements and contributions of the Hispanic, Latino or LatinX community in South Florida,” Cruz stated. “The discussions and programs scheduled this year highlighted female and alumni perspectives and contributions.” 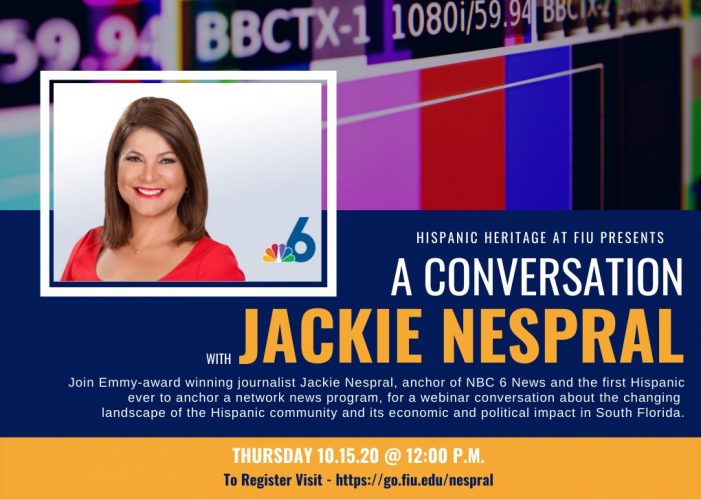 Keynote speaker, Jackie Nespral, NBC 6 anchor, grew up with her Cuban parents in Little Havana where she learned to be proud of her heritage. She graduated from the University of Miami with bachelor’s degrees in psychology and communications and then attended FIU for two years of post-graduate studies in print and broadcast journalism. Throughout her journalism career, Nespral has achieved an array of feats including winning four Emmys, an Easter Seals award and, notably, became the first Hispanic-American network television news anchor as the weekend co-host of NBC’s Today show in New York City with Scott Simon.

“It was great to welcome Jackie Nespral to this virtual FIU event,” said Martinez-Bustos. “As a broadcast journalism professor, I appreciate when veteran journalists speak to our students. They always share great career tips with our aspiring journalists and also describe how they’ve reached their professional goals.”

Nespral began her address by simply posing the question, “What does Hispanic mean to you?” She went on to inspire the audience with her story and career path, showcasing her perseverance and grit. She especially spoke on her experience working on the Today show back in 1992, and described how she utilized her position to show the depth of Hispanic/Latinx culture.

SCJ serves a large percentage of students in the Hispanic/Latinx community. As a faculty member of the school, Martinez-Bustos believes it is crucial that students are given opportunities to grow their cognizance of issues that affect South Florida communities, the country and the world – and then go on to spread this awareness to others.

“As media professionals, we have to tell stories that will help our audiences understand where we’ve been, where we are right now, and where we are headed as individuals and as a community.”

The motivating discussion ended with an overarching tone of inspiration, which appealed to both the journalism students and the staff members in attendance. They saw first-hand what a day in the life of a trailblazing journalist was like as Nespral had to quickly leaving at the end of the Q&A in order to complete her preparations for the Vice President’s arrival. Undoubtedly, the experience of this virtual discussion can set the stage for further discussions and celebrations of Hispanic culture and influence within the U.S. community.