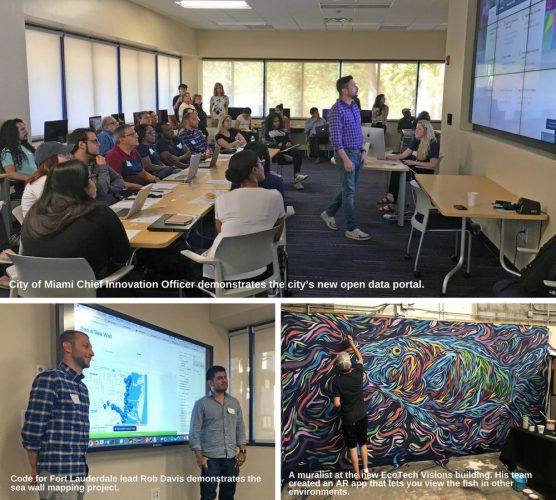 Hackathons are a great way to bring together artists, concerned citizens, students and Miami’s burgeoning tech community to creatively brainstorm some of our area’s most pressing challenges. This Spring, CARTA and The Department of Journalism + Media supported two hackathons, one in connection with International Open Data Day on March 3 (https://opendataday.org/) and the other with the FIU Sea Level Solutions Center on harnessing the technology of augmented reality to address issues of climate change.

The Department of Journalism + Media hosted Open Data Day with Code for Miami (http://codefor.miami/), a civic technology group, in the new Newsroom Facility on FIU’s BBC Campus on Saturday, March 3. International Open Data Day is designed to show the benefits of open data and encourage the adoption of open data policies in government, business and civil society.

Citizens, students and technology specialists worked on challenges designed around the theme of resiliency, using data from the City of Miami’s new Open Data Portal (https://data.miamigov.com/), the 211 Open Data Portal (http://miami.open.211.developer.adopta.agency/), Miami-Dade County’s Open Data Portal (https://opendata.miamidade.gov/)and more. You can see the data sets that were available to the hackers and the hackathon instructions on GitHub (https://github.com/Code-for-Miami/OpenDataDay2018). More than 60 hackers and students attended morning workshops to learn how to use data and multimedia to annotate maps and then applied their new skills to challenges in the afternoon.

CARTA Dean Brian Schriner kicked off the event, which included presentations by City of Miami’s Chief Innovation Officer Mike Sarasti and local climate activist Valencia Gunder.  Samantha Sunne from Google News Labs/SPJ and Sheyla Aguilar de Santana from the FIU GIS Center gave workshops on using Google Maps and ArcGIS to create geospatial data visualizations. Participating teams worked all day and demo’ed projects in the evening. This included a map of sea walls, an important component of climate change management, in the City of Miami; a text-message tool that lets citizens send pictures of damaged sea walls, along with geographic coordinates, to a central location; and a visualization of local campaign donations that shows which neighborhoods contribute the most money.

During the last weekend of April, aka “Earth Month,” teams of local artists and technology developers worked together to brainstorm ways to use augmented reality to educate, inform and engage residents of South Florida about climate change. They had just over 48 hours to conceive a project idea, create a prototype and demonstrate it to a panel of local judges for cash prizes.

FIU President Mark Rosenberg has called the nascent technology of augmented reality “the future of work” for its ability to project video, digital images and smart objects into every day life. The hackathon was designed to help support the Before It’s Too Late project (http://www.beforeitstoolate.earth/), which lets citizens view local mural art through their camera phones to reveal video, animation and interactive content.  Led by local entrepreneur Linda Cheung, Before It’s Too Late has perhaps done more to make AR technology accessible to local citizens than any other organization. During the hackathon, muralists painted the walls of EcoTech Vision’s new building (housed in the old Miami Gardens Police Department), while hackers created the technology to reveal messages about climate change.

Department of Journalism + Media Assistant Professor Susan Jacobson helped organize both of these events. “It’s important for our students to be exposed to these emerging technologies,” she said, “but it’s also important for them to be able to find ways to jump in and participate, and hackathons are a great way to make this happen.”