Natasha Diminich (FIU MIA ’12) and Ileana Rodriguez, Assoc. AIA (FIU M.Arch ’11) won third place for the PARK(ing) Day Design Competition. Emerging professionals in Florida/Caribbean region were invited to submit design proposals for a parklet to be constructed in their communities.

Their winning parklet, entitled “Food Desert,” brings awareness to social needs in their community. Diminich and Rodriguez said, “the Food Desert parklet brings awareness to the lack of accessible or affordable healthy food to various communities within our city. Our design proposes a modular system that can respond to the varying needs of these affected communities by providing a place to grow produce, sell produce, learn about healthy food preparation and nutrition, etc.”

During their education at FIU, Diminich and Rodriguez worked on numerous school projects located in various sites in Miami, including the Everglades, Lincoln Road, Surfside, Downtown Miami, and Coconut Grove. This, they said, “created a sense of belonging and appreciation for our community and our architecture.” Now, they want to give back to their community through their design work.

Diminich received her Master of Interior Architecture in 2012 from FIU. She presented her work, “Re-Use and Sustainable Tourism: Interior Architecture Fostering Social Development in Istria” at the 6th Annual Art & Design for Social Justice Symposium at Florida State University. She is currently an Independent Interior Designer.

Rodriguez received her Master of Architecture in 2011 from FIU. She was a speaker at TEDx FIU 2012 under the theme “What do you see?” She was also a consultant on the United States Olympic Committee from October 2010 to November 2012, and she participated in the 2012 Summer Paralympics in London. She is currently an Architectural Intern at HKS.

You are cordially invited on Friday, September 19th, 2014 to join Diminich and Rodriguez in the celebration of their parklet, Food Desert. Their installation will be located mid-block on NE 2nd Street between NE 2nd Ave and NE 3rd Ave.  It is an all-day event, and other PARK(ing) DAY participants will be showcasing their creations in the Downtown vicinity as well. 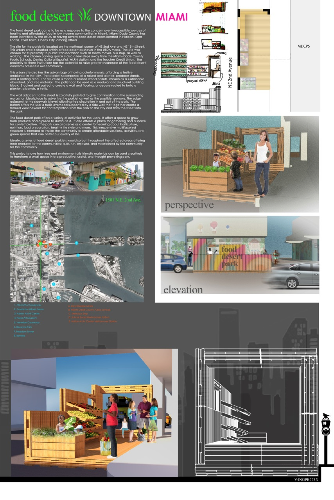 The featured images are provided courtesy of Natasha Diminich and Ileana Rodriguez.

PrevPrevious StoryFestival of the Trees Kickoff a Success!
Next StoryKarim Rashid to be Keynote speaker at 2015 Interior Design Emerging Symposium!Next