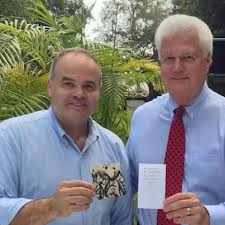 Which is one of the reasons organizers of FLOR500 — a participatory art, nature and history project based out of Florida International University’s College of Architecture and The Arts — is encouraging communities across the state to plant native wildflower gardens, said Christopher Rodriguez, FLOR500 project coordinator.

The project, started by Xavier Cortada, director and artist in residence at FIU, is being done in conjunction with Viva Florida 500 — the state’s quincentennial anniversary celebrating the arrival of Juan Ponce de Leon on Florida’s east coast in 1513.

There are three components to the project — ecologic, artistic and historic, Rodriguez added. Botanists from around the state were asked to identify 500 native Florida wildflower species and separate them based on their region. Fifty-nine different native wildflowers were identified for the north-central region of Florida, which includes Leon, Franklin, Gadsden, Jefferson, Madison, Taylor and Wakulla counties, among others.

Norma Skaggs, plant manager at Native Nurseries, said the most popular native wildflowers in this area are the coreopsis, purple cone flower and the golden rod. Plus, there are advantages to having native wildflower gardens.

“The native wildflowers bring in the native insects, which is great for pollinating,” she said.

“Most of (the native wildflowers) are adaptive to this area,” she added. “And they don’t take a whole lot of extra work or extra care.”

Artists from around the state are being asked to choose a flower in their region to portray through art — photography, painting, sculpting, woodcarving or even mixed media, Rodriguez added. Artists submissions are due by April 1.

Plus organizers are rallying for local schools, libraries and community groups to plant native wildflower gardens in public places for everyone to enjoy, he added. Once the gardens are planted organizers are asking that the garden be dedicated to historical figures from Florida’s 500 years of history. School submissions for dedication gardens are due by March 15.