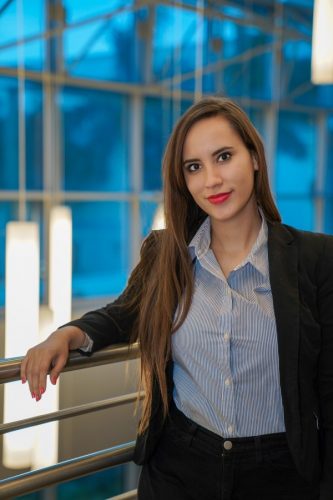 School of Communication + Journalism student, Kimberly Aldunate, has showcased her leadership qualities during her time at FIU. In addition to a variety of exceptional internships, she has served two terms as chapter president for FIU in the Public Relations Student Society of America (PRSSA). FIU PRSSA is a pre-professional national organization dedicated to preparing students for the public relations world. They are open to all majors in the fields of public relations, digital media, marketing and advertising. Recently, Aldunate along with the RSSA group won 2021 Star Chapter for PRSSA nationally! This is a prestigious award only granted to the top-performing chapters.

CARTA News was able to catch up with Aldunate to learn more about her experience in leadership and FIU PRSSA.

What is your major and why did you choose it?
I’m a public relations and advertising major with a minor in social media and e-marketing analytics. I absolutely love public relations! It’s a field where you can be creative and strategic. The opportunities are endless with this major. From working in partnerships, media relations, event management to digital media, crisis management and more! My favorite part of this major is storytelling and building the brand of a person or a company. With a public relations major I have been able to intern in a variety of industries at companies such as: Spotify, United Way Miami, Joe DiMaggio Children’s Hospital Foundation, Miami Super Bowl LIV and others. I’m pursuing a career in media, technology and/or the music industry.

What inspired you to get involved at FIU and PRSSA?
When I first started FIU, I felt a little disconnected and I was even considering transferring to another school. I was part of a few clubs, but I wanted something bigger than just another club on campus. In one of my classes, I heard a professor talking about a club hosting agency tours. That is where I found out about a national public relations club called FIU PRSSA. It was a small club back then but when I learned about all the opportunities it offered, I immediately became a member. When you join FIU PRSSA, you are joining an organization with over 7,000 members who are ambitious and passionate about the public relations field. Thanks to FIU PRSSA, I have been able to take on multiple leadership roles, travel and attend multiple conferences all over the US and expand my professional network.

How has your major helped you in your involvement?
To succeed in public relations, it goes far beyond the classroom. PRSSA gave me all the tools and opportunities to learn about this industry ins and out. Being the chapter president of FIU PRSSA taught me about project management, event planning, pitching, marketing, networking and thinking strategically. I created over 50 events ranging from guest speakers, workshops and agency tours with major companies like Edelman, BCW, rbb Communications, Miami Heat and more. I learned a lot of marketing skills from social media marketing, email marketing and building campaigns. I am proud to say that led my chapter to win multiple awards and programs such as PRSSA National Star Chapter Award twice, PRSSA National Pacesetter Award, had our chapter selected to be part of a prestigious mentoring program with the PRSA College of Fellows and get members to be part of the PRSSA FINN Agency Mentoring program.

In addition, I decided to take a step further and get involved in district and national roles at PRSSA National. The first year I was selected as the Sunshine State District Ambassador and the second year as the Tri-State District Ambassador for PRSSA National. As a district ambassador, my role was to support chapter presidents and their members to help their club succeed. I was also selected to be part of the PRoud Diversity and Inclusion Committee at PRSSA National where we come together to discuss and promote DEI initiatives for 7,000 students. It has been an honor to represent on behalf of FIU PRSSA in national conferences such as PRSSA ICON, Leadership Assembly and PRSSA District Conferences.

As a recipient of the EvClay scholarship – how has it helped you to further be a student leader?
I had the honor of being selected twice in a row for the EV Clay scholarship. I am extremely thankful to PRSA Miami for believing and investing in me to reach my educational and career goals. Being a recipient of the scholarship has helped me be able to continue with my studies, be part of student clubs and intern at multiple companies. I am excited to join PRSA Miami once I graduate and become an active member.

Have there been any professors/staff members that have solidified your decision to pursue your major and/or involvements?
The professors who have made an impact on my major and involvements are Professor Hugo Ottolenghi, FIU PRSSA advisor, Professor Dr. Nancy Richmond, FIU Social Media Association and FIU American Marketing Association co-advisor, Professor Heather Bermudez, incoming PRSA Miami chapter president and Professor Alieen Izquierdo, FIU HACU advisor. They all have supported me in many ways.

Describe the National award you and your group participated in and won.
FIU PRSSA previously had never competed for PRSSA National awards and my goal as chapter president was to start competing for them and moving the chapter forward. I’m proud to say that we were selected as 2020 Star Chapter for PRSSA National for the first time ever! It was such an honor. In order to win this award, the chapter must complete multiple assignments during the year. I applied for it and once again we were selected as the 2021 Star Chapter for PRSSA National. I’m honored and proud that FIU PRSSA’s hard work is now being recognized nationally.

What piece of advice would you give Freshmen who are deciding what career path to follow?
Be proactive, research, get involved and pay it forward. Research, research, research! Everything is online, there are literally no excuses for not finding information about different careers. Secondly, get involved by joining clubs like FIU PRSSA where you are part of a national organization where you can learn from industry experts, go on agency tours and expand your network. Third, take on internships in different industries to find out what you like, and don’t like. Lastly, pay it forward and help each other out. I’m always open to connecting on LinkedIn.