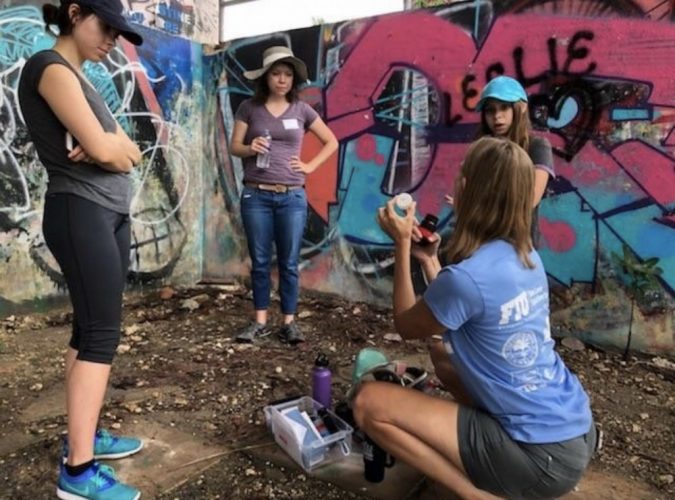 More than 100 FIU students and faculty, government officials and concerned citizens gathered on October 27 for FIU’s 3rd annual Sea Level Solutions Day to document climate change impacts in South Florida. Dr. Tiffany Troxler, Director of Science for the Sea Level Solutions Center within the Institute of Water and Environment, has led the annual citizen science project, in collaboration with several partners during the highest high tides, known as the “King Tides,” to document flooding. This year citizen scientists met at the Miami Rowing Club in Key Biscayne, where students, professors, Miami-Dade citizens, and county officials worked alongside FIU researchers to learn about sea level rise.

Starting at 8:30 am, Dr. Troxler along with City of Miami’s Chief Resiliency Officer, Jane Gilbert spoke on how this event is an opportunity for citizens to get hands-on experience in measuring and collecting water, as well as learning about the responses and adaptation challenges of sea level rise while educating and training the next generation. Alan Dodd with the City of Miami Public Works later honored Gilbert for her incredible work leading the resilience strategy development and plan for Greater Miami and the Beaches. In order to measure urban flooding, every year citizen scientists are equipped with “citizen science kits” that include the tools and instruments necessary to collect water samples, measure water depth and its salinity.

This year, the CREST Center for Aquatic Chemistry and Environment (CAChE) presented their newest sensor technology with robotics and digital fabrication called “Water Wand” and its mobile application. “It was a collaboration between students, faculty, and staff from the Biology, Environmental Science, Architecture and Computer Science departments with the idea to synthesize the kits by combining it into one single tool which makes it easier to measure the same parameters as the kits while automatically uploading data to the app,” said Brad Schonhoff, Program Manager for CREST CAChE.

The annual event was held in conjunction with the School of Communication + Journalism’s Eyes on the Rise project, led by Dr. Susan Jacobson. “Sea Level Solutions Day is an opportunity for citizens to learn about the future impacts of climate change on South Florida,” Jacobson said. “This event complements some of the applications the Department of Journalism + Media have built with the FIU GIS Center and Code for Miami,” she said. Jacobson has led the development of the Sea Level Rise Toolbox, an interactive sea level rise viewer that lets South Florida citizens enter their address to view the potential impact of up to 6 feet of sea level rise on their neighborhoods (http://eyesontherise.org/app) and the Will It Flood? application, which lets Floridians enter their address to view a calendar of the highest high tides (http://willitflood.org).

The attendees were split into teams and did their own field research in various locations around Miami-Dade County, including Shorecrest, Coconut Grove, Virginia Key, Arch Creek, and other locations. As each team worked together to collect water samples and measure the water depth, recording its salinity and looking for signs of contamination, they were enticed to talk about sea level rise and what it means to them and the communities they visited. The hands-on experience educated the public and provided the SLSC with valuable data on urban flooding.