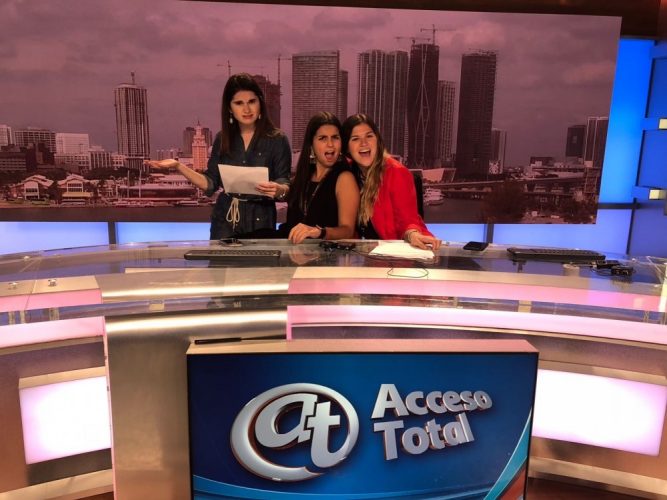 CARTA News » School of Communication » Our Internships with Telemundo

Our Internships with Telemundo

Melissa and Claudia are Broadcast Journalism majors, while Isabella studies Public Relations at FIU. We spoke to Melissa, digital media intern, and Isabella, multiplatform production intern, about their time at Telemundo and how it impacted their personal and professional perspectives.

What did you do at your internship?
Melissa: I worked behind-the-scenes of the nationally syndicated daily morning show “Un Nuevo Día” by creating content for their social media. I wrote and published articles and photo galleries in Spanish, highlighting the latest in celebrity gossip and music trends for the entertainment show “Suelta la Sopa.” I also assisted at any events hosted by the digital department.

What projects did you work on?
Melissa: Our main project for the semester was “Premios Billboard”. We had the inside scoop on everything before it was officially announced, so we had to create articles based on the official press releases or content shared by the artists, photo galleries and social media content for the fans!

How did your internship connect back to your coursework?
Isabella: My major was Public Relations, and I earned a certificate in Social Media Marketing & E-Marketing Analytics. Basically, everything I did with social media and digital content creation tied back to what I studied in class.

What was the coolest thing that happened during your internship?
Melissa: The day that Telemundo announced the artists that were finalists for “Premios Billboard”, the digital department set up a Facebook Live at one of the studios and invited Karol G and Nacho to perform a few songs. They also invited Enrique Santos from iHeartRadio to talk about the finalists. It was like our own private concert.

Isabella: I would say the coolest thing was being part of Telemundo’s move from Hialeah to the amazing new building in Doral. The new building definitely helped us meet more people and create meaningful connections.

What did you like most about your experience?
Isabella: Definitely meeting the amazing people that work at Telemundo. From the hosts and cameramen to every single people in the digital department, everyone was there to help us and made us feel part of the team and not just interns.

Melissa: For me, it was waking up early every other day and having the opportunity to go to “Un Nuevo Día” and interact with the hosts and guest appearances. The show always invited special guests like celebrities, Latin American Youtubers, models, etc. There was never a dull moment.

What did you learn about yourself?
Melissa: Other than solidifying that broadcast journalism was the field for me, I also learned that it takes a lot of hard work to get what you want. I learned that in order to get to where I want to be, I have to continue hustling and be the best I can be.

How did the position increase your professional confidence?
Isabella: This internship helped me gain the experience I needed before graduating. I was exposed to real life duties, and it was exactly what I needed before finishing my bachelor’s degree.

Melissa: I feel more marketable because I have a lot more to bring to the table, experience-wise. At my internship, I had a well-rounded experience. If you would’ve told me a year ago that I would feel as happy and professionally confident as I do now, I wouldn’t believe you.

How did you expand your professional network?
Melissa: I was exposed to amazing people, and I just wasn’t afraid to ask the NBC/Telemundo professionals and talent about their career stories and for their advice.

Isabella: At the beginning, it was difficult for me to network because I felt very little talking to people who were managers, directors or VPs. However, our managers always stressed the importance of networking in any field. So I talked to people outside my team and met them for lunch, arranged meetings with people I wanted to meet and sought guidance from my managers.

How did it help you prove yourself in the “real world”?
Isabella: This internship definitely gave me the “real world” work experience a classroom doesn’t provide. I was lucky to be part of one of the biggest media companies in the United States and saw how it worked first-hand.

What advice do you have for those beginning the internship process?
Melissa: Honestly, I know how discouraging it is when you have applied to internships you’ve wanted and never hear back or you don’t get the one you wanted. Be patient and remember that what’s meant for you will be yours when the time is right.

Isabella: When you are at that point where you are thinking about doing an internship is very important to take that first step, which is APPLYING. Have confidence in yourself and trust the process. Don’t lose sight of what’s important: trusting yourself and learning as much as possible