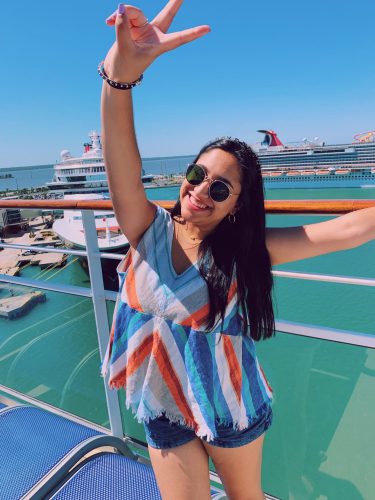 My Experience Studying Abroad at Sea

Sixteen students had the opportunity of a lifetime earlier this summer when they set sail across the Atlantic while partaking in a study abroad program with CARTA. The Communication at Sea program, led by SCJ faculty member Mihaela Plugurasu, was the first of its kind available to CARTA students. CARTA News followed the team’s journey with a first-person account written by a student participant.
—

Never in my wildest dreams did I think I’d be setting sail across the Atlantic Ocean on my 20th birthday, getting ready to study abroad, but sometimes you get lucky enough that your most far-fetched thoughts become your reality.

My name is Tanvi Hathiramani; I’m a junior studying Public Relations, Advertising and Applied Communication; and this summer I had the pleasure of taking part in the Communication at Sea program through FIU. 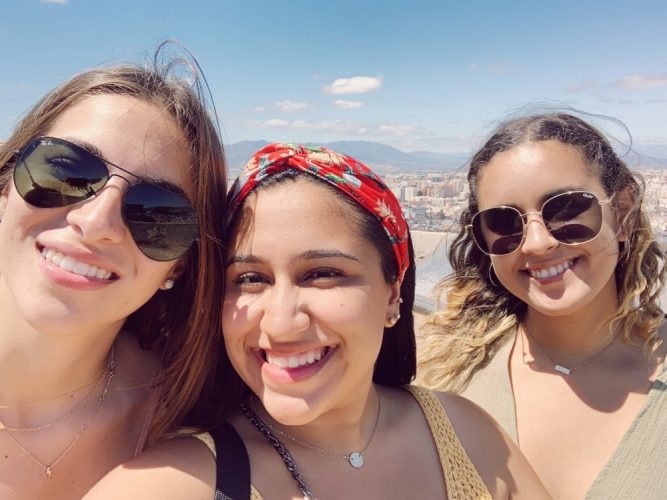 Our class usually started at 9 a.m., which meant waking up at 8:40, running to the dining hall and picking up anything we set our eyes on, and running to the teppanyaki restaurant where our class was held for the next five hours. We were lucky enough to have class only on sea days, which was 9 of the 14 days that we were sailing.

It’s safe to say, having class in a hibachi bar was something I had never done before.

We were able to take two courses during the trip: Branding + Social Media and Multicultural Marketing. Considering that I had just finished a Social Media internship, I decided to choose a course I thought I was good at: social media. I had the opportunity to pick an existing brand or make up my own and create an entire social media campaign during the duration of my trip, which I would then present to my classmates.

For those who took the Multicultural Marketing class, we were given the task of conducting research on a particular demographic on the cruise ship and later went on to create a profile. For some who took both courses, they were able to utilize what they learned in both classes and combine the two projects to complement each other.

They say that studying abroad changes your life, but I thought it was just an exaggeration. I went on the trip having no clue what I was going to do with my future. I knew what field I wanted to be in, but no specific plan in mind. I came back aware of the strengths I have to offer to employers and with a new level of confidence in my ability to present myself and my ideas to others.

In my opinion, studying abroad isn’t only about discovering yourself, but discovering what others have to offer. The impression I had of the people in my program was completely different from who they actually are, which I was only able to figure out by speaking to them during downtime. I tried to have a conversation with every single person on the trip (even if there were only 16 of us).

By the last day of the trip, five of us ended up outside the FC Barcelona stadium haggling with locals trying to buy tickets for the game that had already started. Spoiler: we ended up getting tickets.

This summer was something I never imagined would happen, but in the end, it was the most amazing thing to happen to me, and it’s all thanks to Professor Mihaela Plugurasu, the friends I made on the trip, and the homeless man that taught me how public transportation in Spain works!