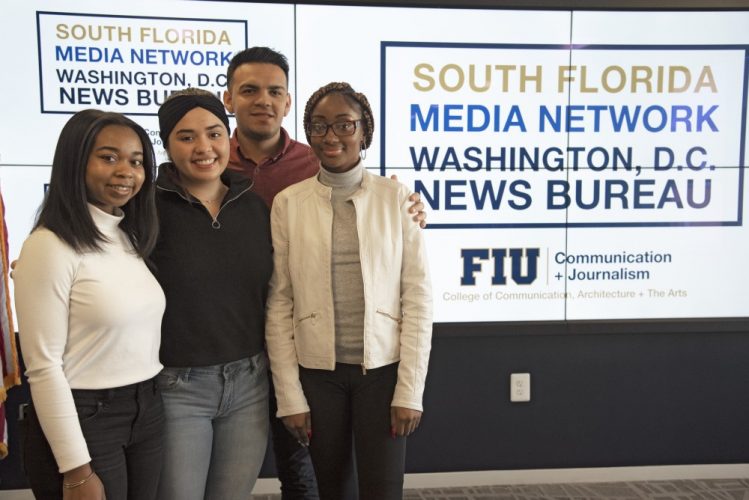 Janet Chusmir was a trailblazer. As the Miami Herald’s executive editor—and its first female editor of any kind—she epitomized courage, conviction, and a refusal to let her aspirations be sidelined.

That pioneering spirit lives on in the scholarship fund (and now included in FIU’s Ignite Campaign) that bears her name. The Janet Chusmir Memorial Scholarship Fund helps deserving School of Communication and Journalism students with a wide range of opportunities—keeping them in the classroom or paving the way for that first internship in Miami or elsewhere.

In Washington, D.C., Juan Salgado, a communications intern at FIU in DC, Nareemah Griffiths, of the CARTA South Florida Media Network D.C. Bureau, Madalyn Medrano, Communications Intern at the Woodrow Wilson International Center for Scholars’ Latin America Program, and Alexis Woodyard, interning at both CARTA’s DC Bureau and at The Reporter’s Committee for Freedom of the Press, all reflected on the opportunities that Janet Chusmir’s legacy gives them.

“The Janet Chusmir scholarship has allowed me to move to DC to intern at The Woodrow Wilson Center and the FIU in DC Office,” Griffiths said. “It has relieved the financial and emotional burden of the living costs that come with being a first-generation college student and interning in the nation’s capital. I have been able to focus on gaining new skills and networking to advance my career once I graduate. I am very thankful for this opportunity which would not have been possible without the Janet Chusmir scholarship.”

For Madalyn Medrano, the Chusmir family’s generosity is part of the university’s focus on its students. “I chose to attend Florida International University for its ability to give so much aid to its students,” she said. “It’s the only way I can make my dreams come true—I am one of the 89% of full-time undergraduate students at FIU that receive some type of aid.”

The scholarship, part of FIU’s Ignite Campaign, will continue to power CARTA students to greatness thanks to new contributions. “We thank all the donors who have been able to give,” said Juan Salgado. “And we hope this can be continued so other students can get the full opportunity that we have received.”