Should the international community rescind sanctions against North Korea? Should counter-terrorism operations be conducted only with the express consent from the states in which they would take place? Does pornography harm the viewer? What is the role of a Liberal Arts education in society today?

These are some of the questions that the FIU Debate Team tackled the weekend of February 1-3, when it participated in the King’s College tournament in New York City.

The format of debate in which our students participate is called British Parliamentary Debate (also known as “Worlds.”) In this format, each round is comprised of four teams from different schools who discuss the implications of a specific pre-defined resolution. The tournament assigns each team of two debaters to different rooms, so each of our FIU teams debated against six other students per round.  Debaters are given only 15 minutes to prepare their case and contentions. During each round, each participant is given 7 minutes to deliver his or her original speech in front of their opponents and a panel of judges.  At the end of the round, the judges rank the teams from 1 to 4.

Two of our teams were just a few points away from breaking into the novice finals in this tournament.

We congratulate the FIU Debate Team for a great performance in the Empire Debates at the King’s College, and look forward to their upcoming competition in the Adelphi Debate Tournament on February 15-17, 2013.

In the picture below, you can see Professor Daniel Blaeuer, Director of Debate, with some of our debaters at the King’s College. Pictured from left to right, Elizabeth Taveras, Jennifer Kleinberg, Ximena Cuadra, and Emily Bello-Pardo. 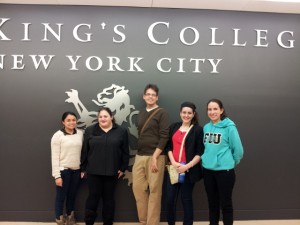