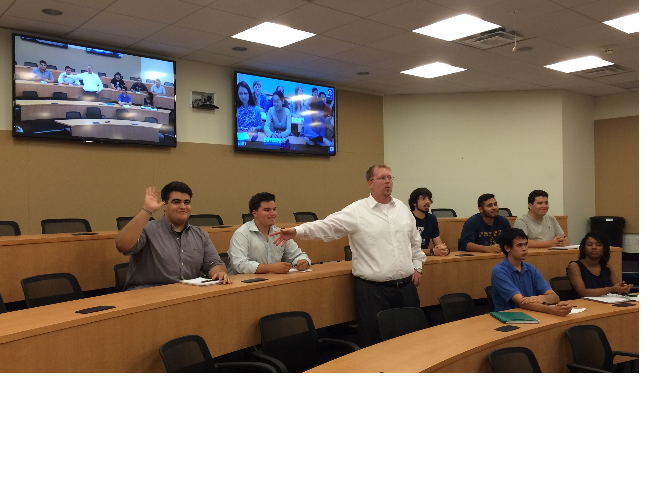 On a recent evening, FIU Debate students sat down to talk with a group of college students on the other side of the world – Siberia, to be precise.

The FIU debaters were surprised at how well the BSU students spoke English and were interested to find out what college life – and the weather – was like in Russia.  The nine BSU students – all studying foreign languages, including English, and planning to work as interpreters or teachers of English – reported that the weather in Ulan-Ude was a cool -5 degrees Celcius (23 degrees Farenheit) and that it had snowed heavily just two days before.  Dashinimaeva, the director of BSU’s Institute of Philology and Mass Communications, explained that college life lasts longer in Russia, with five years of coursework for a degree. She said the curriculum was prescribed for each major so students did not choose their specific classes once they selected a major.  Several of the BSU students said they had visited the U.S. during summer vacations or on work-travel programs. They talked about their majors, their social lives, and how busy they all were.

The Siberian students also had questions for the FIU students, and were surprised to hear that the temperature was a warm 86 degrees Farenheit in Miami. The BSU students explained that they are eager to learn more about both public speaking and debate, neither of which is taught directly in Russian academics.  The FIU Debate program offered to send some public speaking text books and to help the Russian students develop an understanding of debate with the opportunity to practice with the FIU team in upcoming transcontinental talks.

The Russian connection was made possible by Dr. Nuciforo, who is from Russia and attended BSU as an undergrad. She came to the U.S. to do her graduate work at the University of Massachusetts but has maintained contact with colleagues like Professor Dashinimaeva.  Nuciforo joined the Communication Arts faculty in the Fall and is delighted to be able to facilitate this connection between the FIU students and the students in Siberia. Nuciforo said, “a cultural exchange like this literally brings the worlds closer and allows students on both sides to develop their leadership qualities. It promotes mutual understanding that even though there are inevitable cultural differences between the two countries, there are a lot of things in common.”  She also enjoyed the chance to speak Russian and get a glimpse of home.

Debate coach Lakin also joined the Communication Arts faculty this Fall, coming from Michigan’s Ferris State University, where he was the Director of Forensics. Lakin says the FIU Debate team is thrilled to have this new technology available and they plan to make good use of it.  He agreed with Nuciforo’s point about intercultural communication making the world seem smaller, adding “this is an incredible opportunity for our students to connect with young people around the world and learn about their cultures and exchange ideas.  It is going to make them better students and better debaters.”

Not long after the first videoconference with Siberia, the FIU Debate members connected live with students in Caracas, Venezuela and they will also talk to students in Istanbul, Turkey this month.  The conversations with Russia, Turkey and Venezuela were a long time in the making.  In the Spring of 2013, Communication Arts’ faculty member Daniel Blaeuer and administrator Charlene Eberly teamed up to envision a way for the debate team to connect with debate students across the globe.  The debate team had recently moved into “worlds style” debate competitions and Blaeuer wanted to provide them with ways to experience other cultures and learn the communication and debate styles of other countries.

The plan was to create a “Debate Studio” in the Debate Team’s “War Room” in VH219 on the Modesto Maidique Campus and to add the technology to the CommArts Studio on the Biscayne Bay Campus to allow debaters on both campuses to go global, or even just talk to each other.  Blaeuer and Eberly submitted a Technology Fee Proposal to fund the purchase and installation of a state-of-the-art teleconferencing system and were awarded the funds. This month, after a year of consultations with media designers, audio-visual equipment company staff, and technicians, the project was completed.   Besides the teleconferencing equipment, both venues now feature state-of-the-art presentation and recording technology, which will allow debaters to record sessions for playback and review.