CARTA News » Department of Communication » Debate is back at FIU!

Debate is back at FIU!

After a two-year hiatus, FIU’s Debate Club will be returning in full swing in spring 2021 alongside the well-known debate class, both of which are open to all majors. Since its establishment more than 17 years ago, the FIU Debate Club has as accomplished many debating wins.

“We must continue to foster spaces on the FIU campus where students can speak about important issues,” said Gabriella Portela, program manager for the Department of Communication. “By having a Debate Team for FIU students, it helps build key skills for those participating including the confidence to speak in public.”

Under the leadership and guidance of the College of Communication, Architecture + The Arts faculty, the debate team was invited to the prestigious invitation-only National Parliamentary Tournament of Excellence (NPTE) in 2015 – where only 64 teams from across the country were asked to participate. It was a first for FIU. In addition, they have accomplished many other feats such as top honors at the Pan-American Debate Tournament and multiple awards at the University of Florida Gator Tournament.

On its return next spring semester, the team and course, will be instructed and led by professor John Todd who has been teaching at FIU Department of Communication for more than 18 years, mainly the argumentation and debate course. Professor Todd is no stranger to the debating world as he has previously coached the FIU team for some time prior to their hiatus and he is a veteran member of the South Florida Debate League.

“I really love FIU and enjoy the time with [its students]. It saddened me when they didn’t have a debate program anymore, but I’m super excited it’s back,” Todd expressed. “I firmly believe that debate is one of the best things students can do.”

Todd has a great vision for the future of debate at FIU and in CARTA. In general, he hopes the class will equip students with life skills that are transferable to any field they may enter. He hopes that many students take the opportunity to also join the club and get involved with the various competitions they may qualify for. 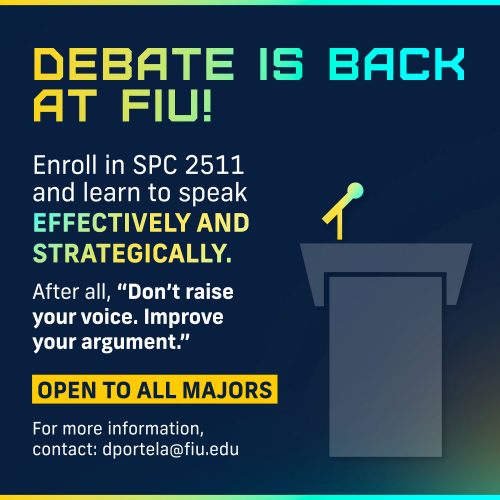