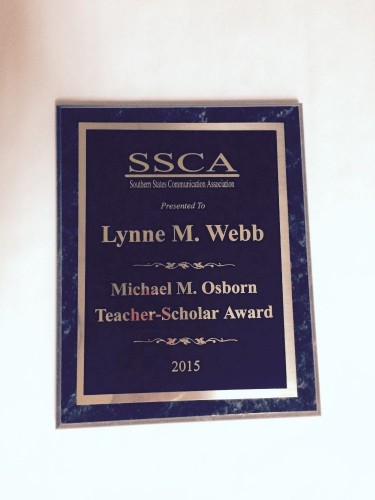 “I am grateful to my former students who nominated me and to the many editors and collaborators who helped me produce a body of scholarship that impressed the selection committee. When I see the list of former winners, I am honored to think that my name will be listed among this prestigious group of scholars,” said Dr. Webb.

The committee received numerous letters nominating Dr. Webb for the award; the number of letters indicates that Dr. Webb has had a tremendous and lasting impact on both colleagues and students. Former students such as Danna Gibson, now the Chair of the Department of Communication at Columbus State University, wrote about the value of Dr. Webb’s encouragement and calming influence, which greatly inspired her. Kandi Walker, Professor of Communication at University of Louisville, wrote that Dr. Webb was very supportive and offered guidance as she was completing her degree. Kimberley Harp, now a speech instructor at Tri-County Technical College, explained that she cannot imagine what graduate school would have been like without Dr. Webb’s guidance and reassurance. Marceline Hayes, Chair of Communication at Arkansas State University, wrote that Dr. Webb had a significant role in mentoring students, helping them to refine their scholarly work for publication.

Dr. Webb’s publications span more than four decades; her scholarship has impacted the field of Communication Arts. She conducts research on family communication as well as computer-mediated communication in personal relationships. Her service to SSCA began in 1989 when she was elected Vice Chair of the Applied Communication Division. She has served SSCA in numerous ways since, including as its President in 1995-96. She also has engaged in a wide variety of institutional and disciplinary service befitting the example that Michael Osborn set for the Communication field.

Dr. Webb joined the FIU Communication Arts faculty in August 2013. She previously held tenured appointments at the Universities of Florida, Memphis, and most recently Arkansas, where in 2012, she was named a J. William Fulbright Master Researcher. Additionally, Dr. Webb served as a visiting professor at the University of Hawaii and Hong Kong Baptist University. She completed her PhD in Communication at the University of Oregon. She teaches courses at FIU that include Interpersonal Communication, Conflict Management, and Communication in Social Media. Dr. Webb exemplifies the best of FIU and serves as an inspiration to all.