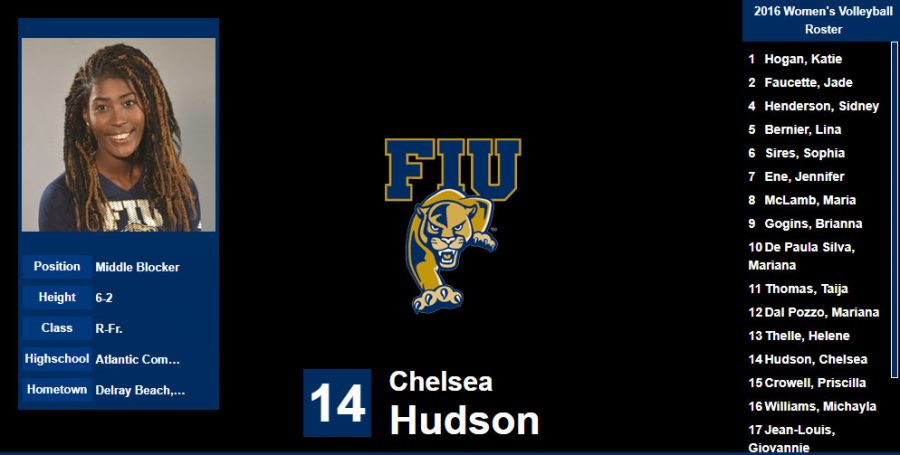 Chelsea Hudson has been playing volleyball for 6 years now. She began playing in high school when her mother encouraged her play a sport and she chose volleyball because it was the only indoor sport that her school offered at the time. She enjoyed the sport so much that she wanted to play it year-round, so her parents enrolled her in a club team. This is where she met her first Olympic coach, Steve Grotowski. He was one of the best coaches that she ever had as he taught her leadership, patience, kindness, and so much more – a true role model. She played club volleyball for two years and eventually signed to go to FIU with a full scholarship where she then met her second Olympic coach, Rita Buck-Crockett. Chelsea considers Rita to be one of the most amazing people and coaches that she has encountered in her career thus far as she taught her court confidence, how to understand others’ perspectives, how to honor others, and so much more.

What is it like being a student athlete at FIU?
I originally choose FIU because I loved the campus and the coaching staff made me feel like family. I really wanted to go to a school where I felt comfortable and Rita made me feel like I was her family, which is what drew me to her and the athletics program. When you sign to go to a school, it’s kind of like your parents are giving you over to your coach. To see that Rita cared so much about the girls on her team really made me want to play for her. Now, I am in my third year on the team, I am the tram captain, and I am still loving the environment that the athletics department has created for its players.

Being a student athlete at FIU is everything that I thought it would be and more. The athletics program here is amazing. Everyone attached to athletics is encouraging and they all want their athletes to succeed. My coaching staff is amazing, they do everything that they can to make us great people on and off of the court. It is fun to go to practice knowing that your coaches want the best for you as an individual.

How do you balance athletics and coursework?
After my first semester at FIU, I got the hang of it. You just figure things out once you realize that there are 24 hours in a day and you have to maximize those hours to get everything done. You eventually learn what works for you. Knowing that I had to block off at least 5-6 hours of my day for athletics sounds crazy, but with maximizing my time, it’s become easier to schedule my academics and extra-curricular activities around it. Each semester just gets easier and easier to manage.

How have you been preparing for this next competition?
I’ve been preparing for months now, since before winter break. I’ve been training on and off of the court and really giving volleyball a lot of my time. Sometimes that may mean watching a couple of volleyball games, running a 6-minute mile, or even getting a couple of reps in at the gym. I’ve just been doing what I can to make myself a better all-around athlete. This is tryout is both mental and physical, so I have been training in all aspects. My coaches have been helping me a lot and their advice is absolutely priceless. As long as I continue to do what I have been doing, I think that I should be fine.

Has it always been a dream to compete for the USA in the Olympics?
Being a volleyball player, of course every girl says that she wants to go to the Olympics, but I believe that a lot of girls say it just to say it. For most of my career, up to this year, I was one of those girls. I never really meant it or thought that I was even close to good enough to actually make the team, until now. Now I say it and I mean it. Now when I train, I train with the mindset to beat the player that I was yesterday. I train with a tangible goal in mind.

Who/what is your inspiration and why?
I have so many inspirations, but my mom and my head coach are my biggest inspirations. My mom, Elpagnier Hudson, is my inspiration because she is the most hardworking and intelligent woman that I know. She never stops bettering herself and she’s probably one of the most authentic people that you’ll ever meet. She has led me to the place that I am at today. Without her, I am not sure how far I could have gone. She challenges me to be the best version of myself, daily. If I could grow to be half of the woman that she is, I would be content. My head coach, Rita Buck-Crockett, is a huge inspiration to me. She is an African-American Olympian and she has done so many amazing things in her career. She pushes me to be the best player and person that I can be. She has made me a better person and all-around athlete in the 3 years that I have been at FIU.

What are your plans after graduation and do they involve the field you are studying?
After graduation, I plan to go to grad school and continue my career at FIU. Once I graduate with my masters, I then plan on either going on to play professional volleyball or follow through with something that lines up with my degrees.

What kind of impact to you hope to make with the tools given to you through your major and/or involvements? What piece of advice would you give student athletes who are deciding what major to pursue?
I hope to make a major impact on all people. If you knew my story, my background, and everything that I went through, you would understand that I am a living testament to God’s faithfulness and favor. I really want to make an impact in the lives of the people that may not think that they’re good enough, the people that were told that they weren’t or would never be good enough. I want those people to know that I am rooting for you and, with enough hard work and dedication, you can do absolutely anything that you desire to do. Don’t give up and definitely don’t listen to the small-minded people that told you, “you can’t”. I believe in you!