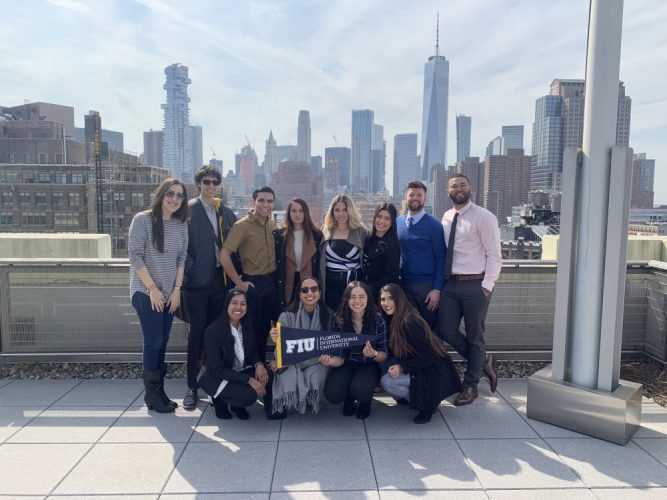 For centuries, New York has been known as a place where dreams are made of (cue Jay Z and Alicia Keys). New York is a city where anything is possible.

BOLD members experienced this feeling first-hand having just wrapped up their third annual agency tour in New York City. BOLD Director and faculty advisor Lilianne Savinon, who organized the tour, accompanied a group of BOLD student members as they crisscrossed the Big Apple to visit top agencies and media companies – including:

The group of 11, which included both lower and upper classmen, had the chance to sit down with top-level executives for one-on-one conversations about agency life and internship and job opportunities. Among the visits was BOLD client Alley Workspaces, which hosted the BOLD bunch at its central headquarters in Chelsea. There, BOLD members met Alley founder and CEO, Jason Saltzman, who was recently appointed to the FIU Foundation Board of Directors.

Senior and BOLD member Elena Herrera, who majors in Political Science and minors in Communications, says the New York trip provided “the reassurance that even though I came from a different major, I know that I made the right choice in pursuing my passion in advertising.”

When asked to describe the trip in one word, Kelly Carias Carrillo, a junior majoring in Public Relations and Applied Communications (PRAAC), said, “Attainable.” Adding, “[p]rior to the New York trip, it didn’t feel like I could make it to New York and make it a reality; however, after seeing other FIU alums thriving in the city, I realized that it was attainable.”

BOLD graphic designer and senior Julian Alicea, also a PRAAC major, said the New York trip impacted his outlook on the future. “On this trip, we all realized that we are all on the same boat – we are very hard on ourselves. After speaking to the people who are in the position that you see yourself in, you realize that you aren’t alone. The key is to work hard and to never give up.”

The group chronicled their trip in a full BOLD takeover of FIU’s Instagram Story (@fiuinstagram). Managed by FIU senior and BOLD Director of Operations, Norhan Elbermawy, the BOLD takeover included pictures and videos of stops along their way in New York. The BOLD Instagram Story Takeover resulted in over 112,000 impressions.