CARTA News » School of Communication » And the Speak-Off Winners Are…

And the Speak-Off Winners Are…

This past Friday, March 22nd, five students competed in our Department’s traditional Speak-Off. This year the competition centered around the theme “Voices of Change.” Arin Phillips, William Perez, Fabiah Lherrison, Ariela Nijamkin and Mario di Giovanni delivered their speeches about important global communicators in GL 100B.

Arin Phillips discussed the use of social media among Generation Y. She argued youth who use social media have been endowed with the Voices of Change. Arin said “We have no excuse for not learning everything we can. We are the building blocks of change.”

William Perez also discussed the importance of social media as a tool to create positive change in today’s world. “We are past the days where the world was so large that one voice could not be heard,” he said and concluded that “you can change the world in 140 characters.”

Fabiah Lherrison’s speech centered around President Obama’s communication strategy and how he has used it to promote change.  “You have to give him (Obama) credit for his communication abilities,” Fabiah said. “Communication is a very powerful tool and if you have mastered it you should use it for good, like Obama has.”

Ariela Nijamkin began her presentation by asking “”If you were given the power of voice, which path would you choose?” She then moved on to compare the use of rhetoric by Adolf Hitler and Martin Luther King Jr. After discussing how these speakers used their voices to create change, she concluded “An effective voice will not lead you to be a moral actor. Because of Hitler’s abuse of his own voice, 6 million jews were murdered.”

Finally, Mario di Giovanni talked about the power of student movements to create change through their usage of social media to spread their message. “Lets allow students to share their ideas and values in the world. Let them become our voices of change.”

After the judges’ votes were in, Ariela Nijamkin, William Perez, and Mario di Giovanni ranked as the top three speakers. They will deliver their speeches in our Department’s end-of-year event, the Communication Arts Forum, which will be held on April 17th. Details about this event to follow.

Below, four of the finalists with Professor Montero, who was in charge of putting together this event. Pictured, from left to right, are: William Perez, Arin Phillips, Professor Montero, Ariela Nijamkin, and Mario di Giovanni. For more pictures, see our Facebook gallery 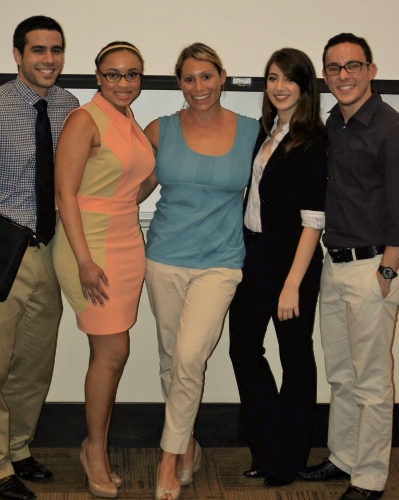