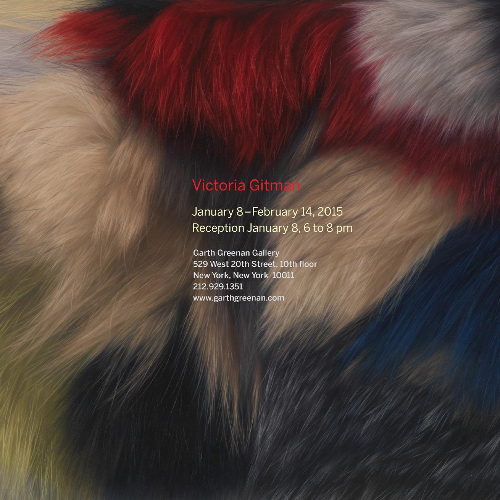 College of Architecture + The Arts alumna Victoria Gitman (BFA ’96) is exhibiting her paintings and drawings at Garth Greenan Gallery in New York. The exhibition opened on Thursday, January 8th, and it is the first U.S. exhibition of Gitman’s since 2011. On view are seven naturalistic paintings and eight figure drawings created between 2012 and 2014. In addition, Gitman will present a mid-career retrospective entitled Victoria Gitman: Desiring Eye at the Pérez Art Museum Miami (PAMM) on Thursday, February 26th.

Gitman’s exhibition at the Garth Greenan Gallery focuses on two bodies of her recent work—life-sized “portraits” of fur purses and a series of diminutive drawings based on compositions by the Old Masters. Set against shallow, neutral-colored backgrounds, each of the fur purses is meticulously rendered from close, direct observation. Gitman paints in oils, hair by hair, creating surfaces that are soft and seductive, yet austere in their precision. Many of the purses feature abstract patterns evocative of early and mid-twentieth century painterly traditions. Evoking modernist compositional techniques, Gitman’s paintings are resolutely frontal, their imagery extending nearly edge-to-edge. A number of the paintings reinforce this subtle formal dialogue by incorporating veiled references to canonical artists like Kazimir Malevich and Mark Rothko. Like her paintings, Gitman’s new figure drawings are also about the erotics of vision. Her tightly cropped figures hover just on the surface of the picture plane, almost within the viewer’s reach. Simultaneously, the medium—graphite on Mylar—lends the images a kind of evanescence, an immaterial quality that makes them difficult to fully grasp. (Source: Garth Greenan Gallery)

Victoria Gitman: Desiring Eye at the Pérez Art Museum Miami will feature 19 works that represent four phases of her career and 14 years of creativity. PAMM said, “set against shallow backgrounds of neutral color, Gitman’s depictions of necklaces, beaded purses, and fur purses make a powerful impact that belies their small scale and banal subject matter.” (For more information on her upcoming exhibition at PAMM, click here.)

Victoria Gitman earned a Bachelor of Arts in Humanities and a Bachelor of Fine Arts in Painting with a minor in Art History from the Florida International University College of Architecture + The Arts, and she graduated through the FIU Honors College. Her work has been featured in solo exhibitions at the Tomio Koyama Gallery in Tokyo (CARTA News: August 2014), the David Nolan Gallery in New York, the Daniel Weinberg Gallery in Los Angeles, the Las Vegas Art Museum, and the Bass Museum of Art in Miami Beach. The work is also in the permanent collections of the Museum of Modern Art and the Whitney Museum of American Art in New York, the Los Angeles County Museum of Art, The Museum of Contemporary Art San Diego, and the Detroit Institute of Arts, among others.

This article was written with the help of the Garth Greenan Gallery.