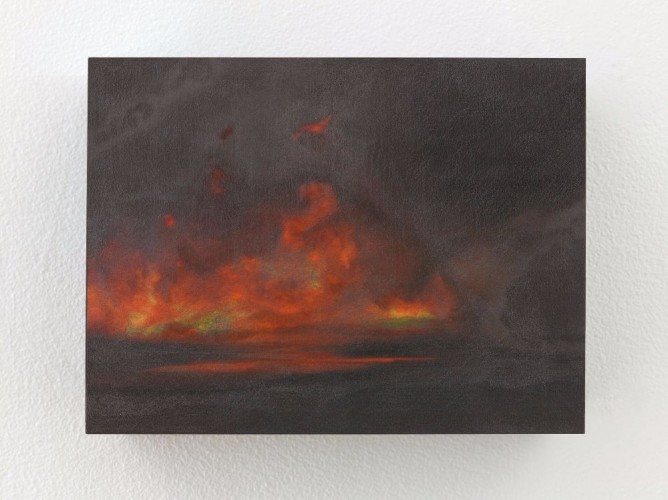 In her second show at the gallery, Fernández deals with the many subtle and layered references – historical, environmental, social – of the iconic and universal element of fire. Creating an entirely new body of work, Fernández uses images of fire to refer to contemporary American violence, as well as the technique of slash and burn used by indigenous people throughout the Americas to shape and manipulate the land. Contrary to popular belief and warped historical perceptions, the “New World” was not a wilderness at the time of European contact, but rather an environment that the indigenous people had altered to their benefit for thousands of years, using fire in sophisticated, deliberate ways. Fernández here seeks to revise our notion of what is the “American Landscape” and who gets to define it. (Source: Anthony Meier Fine Arts)

Fernández also summons up the pivotal and fateful significance of fire in San Francisco’s history as a variation of destruction and renewal in the city’s recent past.  She employs the image of fire as present and ingrained in the city’s collective imagination. (Source: Anthony Meier Fine Arts)

The title Small American Fires is also a reference to what we think of as “American art,” a nod to Ed Ruscha’s piece “Various Small Fires and a Glass of Milk,” and Bruce Nauman’s performance piece in which he burns Ruscha’s book. (Source: Anthony Meier Fine Arts)

Fernández’s new body of work is also intricately tied to her 2005 piece titled Fire, a dyed silk and steel sculpture in the permanent collection of SFMOMA. The sculpture was most recently included in the Beyond Belief exhibition at the Contemporary Jewish Museum in Fall 2013.  Fernández’s work is also included in the permanent collections of The Museum of Modern Art NY; the Museum of Contemporary Art, Chicago; the Miami Art Museum; the Modern Art Museum of Fort Worth; the Israel Museum, Tel Aviv; the Blanton Museum of Art, Austin TX; the Saint Louis Art Museum; The Walker Art Center, Minneapolis; and the Nasher Sculpture Center, Dallas TX; among many others. (Source: Anthony Meier Fine Arts)