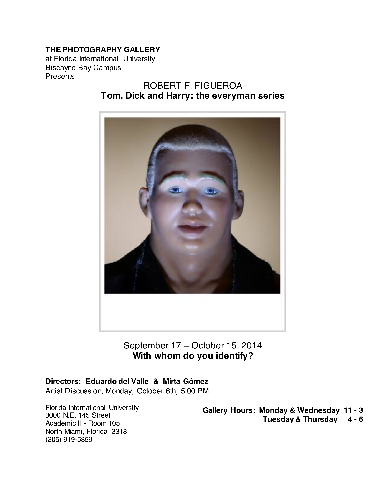 At the FIU Photography Gallery at the Biscayne Bay Campus, Robert F. Figueroa (BFA ’14) is showing his work in Tom, Dick and Harry: the everyman series, starting Wednesday September 17th.

To describe the theme behind this exhibition, Figueroa presents the following questions:

The FIU Photography Gallery – and this exhibition – is directed by Eduardo del Valle and Mirta Gómez, Professors of Photography.

Tom, Dick and Harry: the everyman series will run from September 17th to October 15th, 2014 at the FIU Photography Gallery. Gallery Hours: Monday and Wednesday, 11AM – 3PM; Tuesday and Thursday, 4PM – 6PM.

Figueroa is currently a freelance photographer. He has previously been the webmaster for MiamiARTzine.com and a personal assistant for writer and entertainer David Leddick. His work has been featured in Jewels (Bruno Gmunder Publications, Germany 2010) and Ocean Drive Magazine. He has participated in exhibitions at The Patricia & Phillip Frost Art Museum, Miami-Dade College, the House of Art, and the Leslie Lohman Museum of Gay and Lesbian Art in New York. He received his Associate in Science Degree in Photographic Technology with honors from Miami-Dade College in 2011, and his Bachelor of Fine Arts in Art with summa cum laude recognition from FIU in 2014.