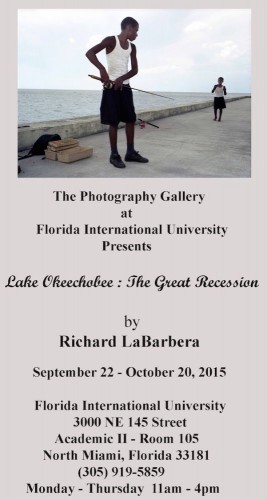 I started photographing Lake Okeechobee and its residents in 2008 from the perspective of our diminishing natural resources. Now, after four years of intensive photography and practically a resident myself, I have come to understand that I have also been capturing the lives of these people in the midst of a great recession, in an area already severely strained in the best of times. Their mannerisms, their body language, their dress, their occupations, and how they play all lend a sense of themselves to the camera’s lens, which captures and defines their lives, unique as the neighborhoods in which they live: Pahokee, Okeechobee, Buckhead Ridge, Moore Haven and Clewiston.

Using a 4 X 5 view camera, the sitters are aware of the camera’s presence but remain unposed and unaffected while I wait for a moment of truth, sincerity and strength that many of my subjects exhibit during tough times. The lake, resting in the middle of the state, sparsely populated and surrounded by sugar cane fields, offers a low cost of living for those trying to make ends meet on little or no income. Florida is one of the states most affected by the recession. Recovery has been slow and many people remain unemployed. I often felt transported to the depression era of Dorothea Lange while photographing the hardscrabble inhabitants.

LaBarbera was born and raised in New York. He is the recipient of the 2004 and 2014 South Florida Cultural Consortium Fellowship. LaBarbera’s work has appeared in solo and group shows nationally. He graduated with his Masters of Fine Arts degree from Columbia University in 2004, and he has taught photography at Columbia University and Florida International University. He currently teaches at Palm Beach State College and Miami Dade College. His work is in the collections of The NSU Art Museum Fort Lauderdale and art collectors around the country. Recently, LaBarbera’s work was recently featured in the Musee du Louvre in Paris during the Fifth Annual Exposure Award reception (CARTA News: August 2015).