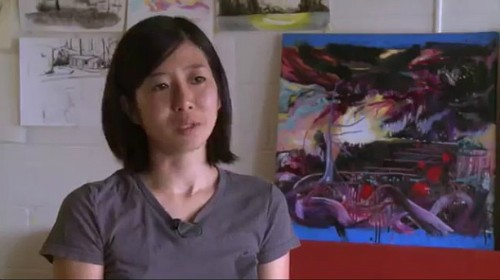 On September 3rd and 6th, WPBT2 aired an episode of Art Loft that featured Professor of Painting Harumi Abe. The episode focused on Abe’s participation in the Everglades Artist in Residence Program, for which Abe spent the month of July in Everglades National Park. She described her experiences in the park, discussing how she defines the Everglades as a home: it “houses” the natural environment – the flora and animal life – that it contains. Additionally, it became a home for the artist during her residency. “It was my shelter for a month,” she said. “I slept, ate, and made art there. I think one of the important realizations [I had] was that I do – and many of us do – live in the Everglades. The true Everglades starts from the Okeechobee area. We just don’t often think about that….” During the Residence Program, Abe created new works that respond to temporary home she had in the Everglades, which was, in fact, a studio in the middle of wildlife.

An Art Loft producer had discovered Abe through her work that is now exhibiting at the Lee Wagener Art Gallery in Ft. Lauderdale/Hollywood International Airport. On display there until September 30th is Abe’s series 134 days and 121 hours – the title being the exact walking distance from the artist’s Hollywood, FL home to her childhood home in Japan, according to Google Maps. Reflecting on the series, Abe said, “The idea of home is very interesting because no matter where I move, I am still trying to create a sense of comfort – a sense of my childhood home in my new home of South Florida. And I believe this phenomenon happens to many of us.”

The College of Architecture + the Arts congratulates Professor Harumi Abe on her television spot and on her exhibition at the Lee Wagener Art Gallery.