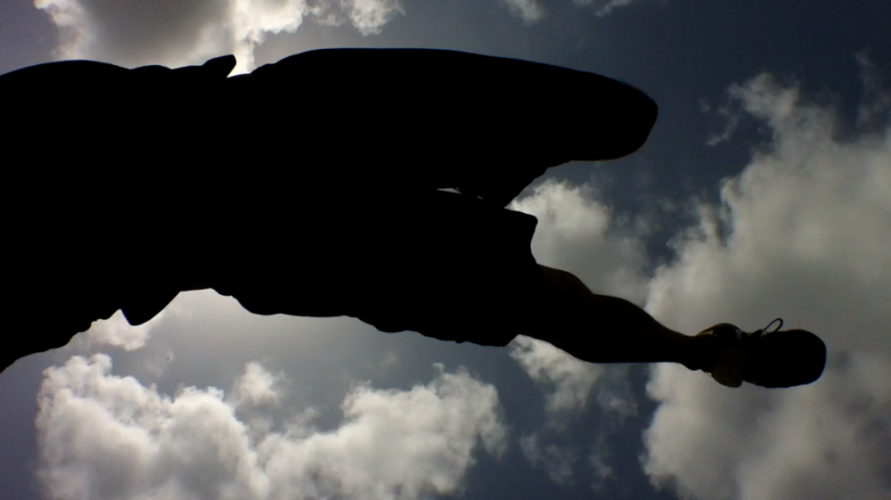 Michael Namkung opens ‘Flying Towards the Ground’ at Locust Projects

Assistant Professor Michael Namkung will open Flying Towards the Ground on Saturday, August 29th in the Project Room at Locust Projects, an exhibition space for upcoming artists located in the Design District.

Flying Towards the Ground has already been featured in a WLRN article and in a WLRN radio segment. It will be opening alongside the Locust Projects exhibition Stone Underground by Jedediah Caesar.

Flying Towards the Ground is a new project by California-born, Miami-based artist Michael Namkung, which explores humans’ desire for flight, and our concurrent fear of falling. The artist’s interdisciplinary art practice often draws on the language of sports training and athletic performance as a means to explore the sensory experience of drawing under physical strain. At Locust Projects – as with many of his artworks – the form of the installation is determined by Namkung’s physical effort, combined with an element of chance.

Namkung’s project has its roots in his recurring dreams of becoming airborne, as well as his literal experience of flying and falling as a sportsman: he has played Ultimate Frisbee for more than twenty years, and Flying Towards the Ground is particularly influenced by this pursuit. His work is performative in a number of senses, but the viewer sees the physical results of the artist’s perseverance and determination rather than witnessing the performance itself. Prior to the opening of his exhibition, Namkung will cover the floor of the Project Room with a thick bed of damp sand. After raising the space’s garage door and undertaking a run-up, the artist will launch himself into the space, briefly attaining flight. The impact of his falling body will create depressions in the sand, leaving areas of negative space that will then be filled with plaster. Once the plaster has hardened, the solid forms will be excavated and hung from the ceiling, levitating like clouds over the sand. These sculptural elements will be accompanied by a composite video featuring a sustained image of the artist’s body in flight.

The exhibition is accompanied by a publication titled Flying Towards the Ground: A Reader on Flying and Falling, a compilation of short texts that reflect on the desire to fly and the fear of falling, from a range of perspectives.

Flying Towards the Ground will open on Saturday, August 29th, 2015 at 7:30PM, along with the exhibition Stone Underground by Jedediah Caesar. A conversation with the artists will take place an hour earlier, at 6:30PM. Locust Projects: 3852 North Miami Avenue, Miami, FL 33127.

Michael Namkung was born in Oakland, California, and lives and works in Miami. He received his MFA with Distinction from San Francisco State University in 2009. His work has been exhibited at The Drawing Center, New York; The Projects, Fort Lauderdale; Niterói Contemporary Art Museum, Brazil; SFMOMA; Root Division, San Francisco; and Yerba Buena Center for the Arts, San Francisco. He is currently an Assistant Professor of Drawing at Florida International University.

Locust Projects is a not for profit exhibition space dedicated to providing contemporary visual artists the freedom to experiment with new ideas without the pressures of gallery sales or limitations of conventional exhibition spaces. Local, national and international artists are encouraged to create site-specific installations as an extension of their representative work. Locust Projects supports the local community through educational initiatives and programming that are free to the public.

Locust Projects’ exhibitions and programming are made possible with the support from: The Alvah H. and Wyline P. Chapman Foundation, The Andy Warhol Foundation for the Visual Arts; Cowles Charitable Trust; FAENA, The State of Florida, Department of State, Division of Cultural Affairs and the Florida Council on Arts and Culture; The John S. and James L. Knight Foundation; the Miami-Dade County Department of Cultural Affairs and the Cultural Affairs Council, the Miami-Dade County Mayor and Board of County Commissioners; the National Endowment for the Arts Art Works Grant; Locust Projects Exhibitionist Members.

The information in this article is provided courtesy of Locust Projects.