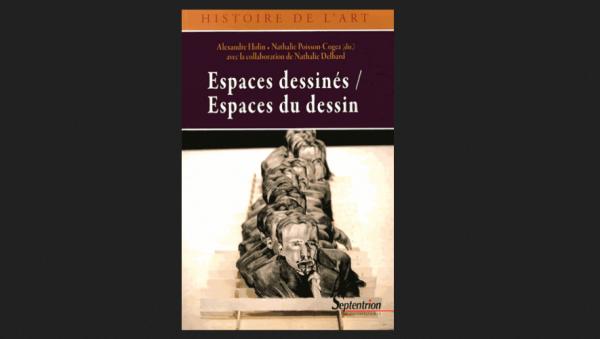 The work of College of Architecture + The Arts’ Michael Namkung, Assistant Professor of Drawing has been featured in Espaces du dessin / espaces dessinés, an art history book by Alexandre Holin, Nathalie Poisson-Cogez, and Nathalie Delbard. The book examines the relationship between drawing and the element of space, and how this relationship can bridge seemingly contrasting disciplines.

In the chapter entitled «A portée de main, de pied ou de roue » L’espace atteignable dans les pratiques graphiques performatives contemporaines,» author Katrin Gattinger discusses Namkung’s oeuvre alongside the work of Tom Marioni, Yukinori Yanagi, Alan Storey, and Francis Alÿs, addressing how these artists negotiate space through performance and drawing, and how their drawings reveal limitations of the body and the drawing space. Gattinger examines the tension between the body and its environment, drawing connections between the extreme limits under which these artists work, and experiences of imprisonment or torture. She specifically addresses two of Namkung’s works, Wall Sit Relocation and Pendulum, in which the artist’s body is physically restrained (suspended upside down from the ceiling in Pendulum, for example) as he struggles to delineate the limits of the drawing space in relationship to his body. Gattinger concludes that these artists show the limits of space, and when crossing these limits, either physically or symbolically, open a new space in which aesthetic, political and physical categories can be reimagined by the drawing of a single line.

Michael Namkung received a Master of Fine Arts in Drawing and Painting from San Francisco State University. He has exhibited at SFMOMA, Yerba Buena Center for the Arts, and Headlands Center for the Arts. He has been awarded the 2010 James Rosenquist Artist in Residency in Fargo, North Dakota, the Investing in Artists Grant from the Center for Cultural Innovation, and a Tanne Foundation Award. Namkung is known for his emphasis on the human body and movement. The Drawing Gym projects encourage people to become aware of their bodies and to explore their physical limits during the activity of drawing,” said Namkung. “I’m interested in testing discomfort, giving permission to experience pain, and the meaning of failure. I am preoccupied with the expression and representation of the vulnerability that is exposed under these conditions, and the ability of the drawn line to index this experience.”