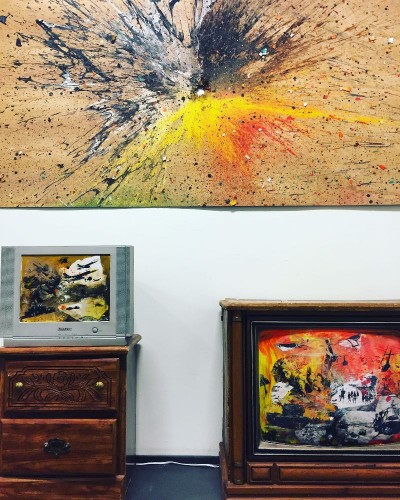 Statement about each artist’s work are below:

My work seeks to investigate the boundaries between materiality, space, and music. Coming from a musical background it is important for me as an artist to incorporate that part of my identity in my work as it continues to explore space with thread; thread whose purpose in my work is to mimic certain tonalities that exist not only in music as a sonic experience but also tonalities that exist within sheet music as a visual experience. Although some of my materials might vary from piece to piece, my methodology of producing my works remains consistent and, often times, these ideas manifest themselves as installations rather than pieces that might hang on a wall….[T]he works that I produce will always influence the pieces that come after, which I feel can better inform me as an artist of what exactly I want the audience to take away from my artworks.
– Javi Cuarezma

My work in Machines utilized guns as a tool to make new drawings and paintings. I am interested in the relationship of high speed projectiles and their connection to the cosmos. I would like to bring to light ideas of creation and existence through the spontaneous design created by the weapons used. The work “Meet Your Maker” touches upon the idea that the universe, in its nature, is a volatile place and that human violence may be a symptom of chaos. The title itself has a duality to it, like the cosmic image that is projected by light. On one end it has the warm comfort of a starry summer night, but on the other it is an image of a very deadly and unstable place, thus the use of weapons to manufacture the aesthetic. The televisions in the center of the room are titled “War Machine 1970” and “War Machine 1990.” Each television was used as a canvas for a collage of known war images from the era in which each television was manufactured. Both of these are in themselves machines utilized by governments to spread propaganda and display images of war. I displayed them as a kind of timeline to show the length and continual churning of the physical war machine.
– Michael Gray

My series of work is an inquiry into destruction as a means of creation by using improvised explosives as the “brush” for latex-based paints. The resulting works reference action-painting. However, by using bombs, which are simple machines, as a means of delivering paint onto conventional building materials, the work also suggests that terrorism can be a means of artistry for delivering fear in the machinery of power structures.
– Sterling Rook