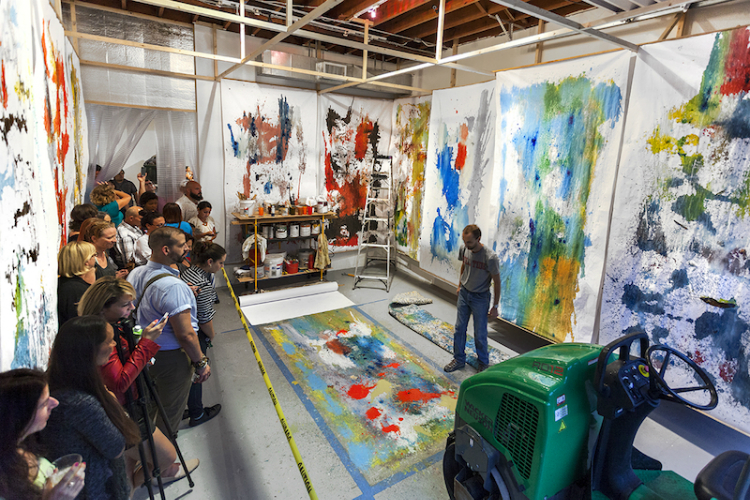 On July 13, artist and current MFA student Nick Gilmore saw the launch of his solo show Quick Millennia at Locust Projects, an exhibition space for upcoming artists located in the Design District. Gilmore graduated with a BA in Studio Art from Spring Hill College in 1999, and had studied abroad for his BA in Florence, Italy at Scuola Lorenzo de Medici in 1998. He is now starting his second year as an MFA student in Florida International University’s College of Architecture + the Arts. For his first year in the program, however, Gilmore wanted to start on a new, innovative project. He sent a proposal to Locust Projects, with the hope of being accepted for its Locust Arts Builders (LAB) MFA program.

Gina Russo, who works at the non-profit organization, remembers when Locust Projects received Gilmore’s proposal. “We thought it was the best fit for our mission and our space,” she said. In addition, the group admired Gilmore’s work ethic. “He was very self-directed [and] self-motivated.” The LAB program was especially interested in his innovative work, Quick Millennia – which Gilmore named after Quick Millions, a sculpture by land-artist Robert Smithson. After watching Gilmore at the opening reception of Quick Millennia, Russo commented on his seemingly raw performance, describing him as being “very hands-on…” and calling his work as “a spectacle.”

Gilmore’s industrial experience as a carpenter and electrician showed through his performance, which involved his splashing paint and dropping debris on the room floor, laying paper over the materials, and driving over these layers with an asphalt roller. “A different space might not have allowed for the use of a [roller],” said Gilmore, “or [might have] required a different layout for the ceiling grid….[LAB] is an excellent opportunity provided by Locust Projects for MFA students to pursue a project they might otherwise be unable to produce.”

Gilmore explores the notion of “destructive progress” in Quick Millennia, which implies that “much of the ‘destruction’ that occurs is done in order to support a growing, legitimate, human need for resources.” He said, “I think humans are just as much a part of nature as any plant or animal, and, thus, everything that we do is also, by extension, a part of nature. Therefore, however much damage we inflict will still, fundamentally, be the result of natural process/evolution.” Gilmore emphasizes, however, that this does not signify an exploitation of earthly resources. He wants there to be responsibility and sustainability in the use of these resources, and wants to see that humanity and nature are viewed as one entity.

As he currently starts his second year as an MFA student, Gilmore reflects on his experiences at FIU: “The first year of this MFA program was completely transformative for me. I came in with a very limited and somewhat naïve perspective of art, which was radically changed by the faculty and content of this program. Beforehand, never in a million years would I have developed Quick Millennia.”