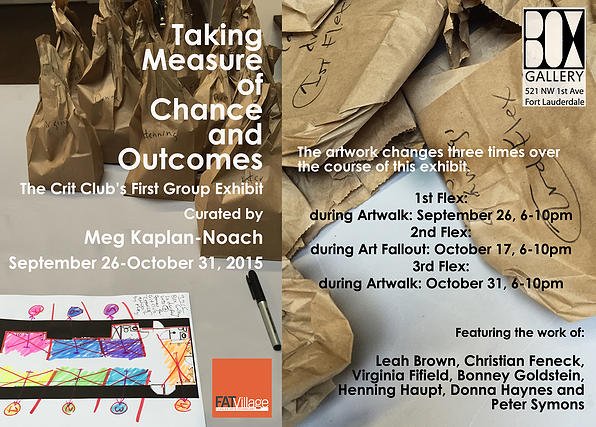 MFA: Curatorial Practice Track candidate Meg Kaplan-Noach will open the first flex of a group exhibition called Taking Measure of Chance and Outcomes, at BOX Gallery in the FATVillage (Flagler Arts and Technology Village) Arts District. Kaplan-Noach is the curator behind this new exhibition, which explores chance and serendipity and opposes the use of the curatorial eye.

When presenting a group exhibition, the curatorial role generally encourages the question, Why are these artworks together? The answer most likely would be something along the lines of, “an exploration of artistic concepts and practices,” or “the artists’ individual aesthetics and materials,” or simply “to provide a showcase for the participants.” Many group exhibitions thoughtfully braid artworks together to highlight specific curatorial points of view while acknowledging considerations of the venue, the curator, and the artists.

Taking Measure of Chance and Outcomes, which includes work by The Crit Club, is not this kind of exhibit. Here, curator Meg Kaplan-Noach challenges her own role by utilizing the concept of curation-by-chance as an exhibition-organizing methodology. She actively works to remove a unifying theme, exploring, instead, the subtleties of serendipity.

The Crit Club is a group of seven diverse professional artists, located in and around FATVillage. Leah Brown, Christian Feneck, Virginia Fifield, Bonney Goldstein, Henning Haupt, Donna Haynes, and Peter Symons initially formed to provide each other ongoing no-holds-barred criticism. Although they wished to collaborate on an exhibition, they found that discovering a conceptual binding to fix the show was proving difficult. Therefore, as their first curator charged with organizing their maiden show, Meg Kaplan-Noach’s role was to probe, ponder, and propose a justifying logic to fuse their artworks together. She developed a scholarly methodology of chance, inspired by its occasional use by art institutions as a convention to prohibit making aesthetic choices for how works become associated with each other. Thus, she deliberately attempted to negate privileging in order to eliminate the curatorial eye. This emphasized the individuality of The Crit Club members, while acknowledging the group ethos. The included artworks have been organized in the gallery through methods of chance.

The show will have three iterations or flexes in order to observe this notion of chance. Here, for their show, each member specifically made three fresh artworks, with at least one work charged with exploring chance as an underpinning concept.

Drawing artworks one-by-one from seven brown paper bags – one for each artist’s three works – BOX Gallery was divided into seven consecutive areas, each with a corresponding number (also put into a separate brown bag). One at a time, seven artworks were picked out of the bags, each picked simultaneously with a corresponding gallery position. This was repeated for all of the three separate iterations. Thus, this work was situated in that spot for each flex.

It is hoped that having three alternating changes of this exhibition will uncover the elusive visual manifestations of chance. For it is in these flexes and changes where chance is most obviously revealed, and can be experienced. It is the gallery’s hope that seeing all three variations will permit its viewers to fully experience how chance makes meanings that may not have previously existed. Here, chance decides and chance rules.

BOX Gallery is a new contemporary art gallery adjacent to The Projects Contemporary Art Space in the heart of the FATVillage Arts District, (Flagler Arts and Technology Village). FATVillage is the impetus for Fort Lauderdale’s ever growing arts community, and the founder of the monthly Last-Saturday Art walks that have now expanded to run shuttles between clusters of artists’ studios, galleries, and creative businesses throughout Flagler Village. To see images of a few previous exhibits in the space, go to www.boxcontemporary.com.

Taking Measure of Chance and Outcomes will open with its first flex on Saturday, September 26th, 2015 from 6PM-10PM during Artwalk at BOX Gallery in FATVillage Arts District: 521 NW 1st Ave, Ft Lauderdale, FL 33301.

The dates and times of the subsequent flexes are indicated below: