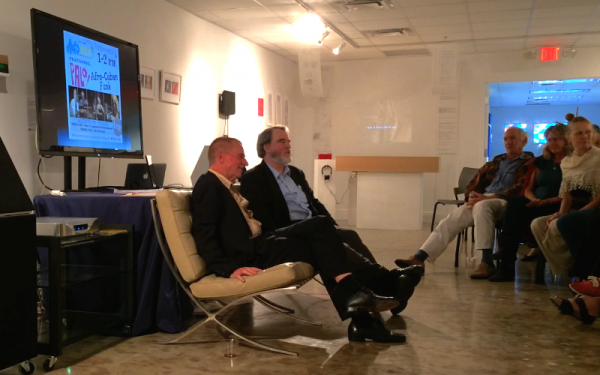 Ed Bell, host, producer, and announcer at WLRN, lectured at the College of Architecture + The Arts | Miami Beach Urban Studios, as part of the FIU UNTITLED ART TALKS.

At MBUS, Bell announced his retirement from WLRN after working in the public radio outlet for 37 years. He discussed his work as producer and host of South Florida Arts Beat, and he discussed influences on his taste for Jazz, Blues, and Rock N’Roll.

Helmut Schuster (owner of Gallery Schuster in Berlin, Miami, and Potsdam) helped to lead the talk with Bell. CARTA Dean Brian Schriner and many of Bell’s friends and colleagues were in attendance at MBUS for the event, and Russel Mofsky of The Gold Dust Lounge and Andrew Yeomanson of Spam Allstars performed a musical piece in honor of Bell’s career.

Bell has been involved in the local music scene since getting his start on the air at the University of Miami’s WVUM in 1971. In the years that followed, he co-produced jazz legend “Symphony Sid” Torin’s show on the all-jazz WBUS, Miami Beach. Bell hosted live broadcasts of Jazz concerts on WTMI from the Airliner Jazz Club and worked as a sound designer at the Coconut Grove Playhouse. Since starting at WLRN 91.3 FM in 1977, Ed has spearheaded many initiatives in support of South Florida’s jazz and blues artists, especially in his work as a promoter and concert series producer. One of Ed’s most distinguished efforts as a jazz producer was his role as a principal co-founder of the Hollywood Jazz Festival. From 1983 to 1986, Ed turned the festival into a memorable weekend of television and live radio broadcasts of top locally, nationally and even internationally known jazz musicians. In his first twenty years at WRLN, Ed was instrumental in making WLRN South Florida’s premier jazz and blues station. Soon after coming to WLRN, he began his Lunchtime Miami program featuring a broad history of great American music, jazz, blues and R&B. Each Friday, he produced a half-hour segment called South Florida’s Own that highlighted the work of the best local jazz, blues and R&B musicians. Interspersing his music presentations with intelligent interviews featuring international, national and local musicians and cultural arts leaders, the show became a unique presentation on the South Florida radio dial. In June, 1995, local news magazine New Times deemed Ed the Best Local Jazz Advocate in its best of South Florida issue. (Source: WLRN)

The four-part lecture series of the FIU UNTITLED ART TALKS culminates in a curated CARTA exhibition at UNTITLED during Art Basel | Miami Beach. This public-private partnership between the FIU College of Architecture + The Arts and UNTITLED Art Fair and Helmut Schuster aligns with the strategic goals outlined in CARTA 2020. Dean Brian Schriner said, “It is an excellent opportunity to (re)introduce CARTA – our faculty, students, professional staff, and alumni – to the community, while being a vital part of Art Basel and the international arts community.”

Through this partnership, the FIU College of Architecture + The Arts aims to set itself apart as a national and global thought-leader in contemporary art and design, and as an institution involved in the local and international artistic and cultural communities through the work of its seven departments. The College also aims to position its Miami Beach Urban Studios, as Dean Schriner put it, “as a global solution-center that utilizes the power of architecture and the arts to create, innovate, and inspire solutions to social, economic, and environmental problems.”

The next event in the FIU UNTITLED ART TALKS series will occur on Monday, November 17th, 2014. Check the website for more details. http://arttalksmiami.com/.