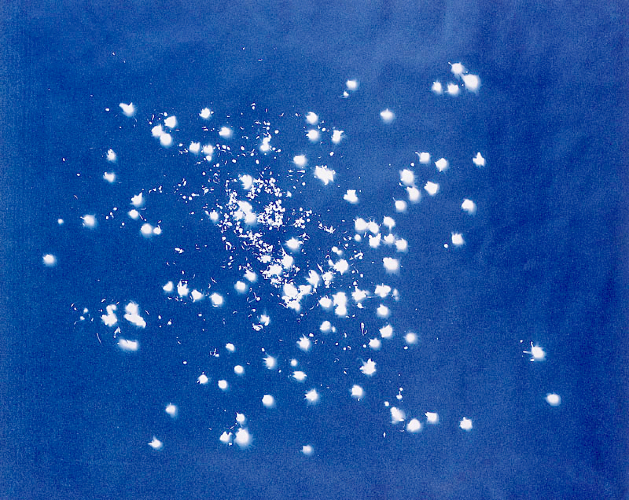 On Friday, October 25th, internationally renowned artist, curator, critic, and activist elin o’Hara slavick lectured to MFA students at the College of Architecture + the Arts’ Miami Beach Urban Studios, after lecturing at the Wolfsonian-FIU the day before. Slavick discussed her recent visits to Japan, and the work that has resulted from her travels. Slavick is known for her books Bomb After Bomb: A Violent Cartography. She is a Professor of Visual Art, Theory and Practice at the University of North Carolina at Chapel Hill.

Slavick traveled to Japan over a series of three trips: three summer months in  2008, two weeks in 2011, and two weeks in October, 2013. Her focus during these travels was to document the present-day remnants and results of the 1945 atomic bomb in Hiroshima. She produced cyanotypes, rubbings, and autoradiographs of once personal items, historical artifacts, and pieces from the local fauna. These works, paradoxically, represent both the loss and survival surrounding the A-bomb. Moreover, they show the awesome, intimidating power of radiation and light.

At MBUS, slavick discussed these elements of her work with the MFA students of Chair and Associate Professor Jacek Kolasinski. She expounded, also, on the political commentary of her work, and how she intends for her imagery to make a viewer think – to make him/her consider the reasoning, or lack thereof, behind war and violence. Slavick’s recently released book, After Hiroshima, encapsulates this theme. The book features an essay by art historian and art critic James Elkins, along with the work she produced as a result of her travels – fifty-six color photographs that convey loss and survival, light and darkness.

The featured image is a cyanotype called “Dead Flowers” by elin o’Hara slavick.